Raid on the home of Bakhrom Khamroev 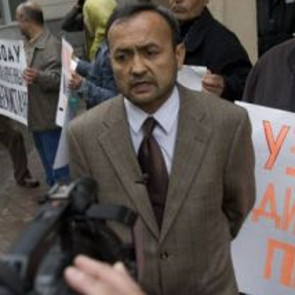 Bakhrom Khamroev is a human rights lawyer and Head of Erdam, an organisation that works to protect migrant workers from Central Asia in Russia. The human rights defender also assists Uzbekistani political refugees who are persecuted in Uzbekistan and Russia due to their civil and political activism, as well as their religious beliefs.

At approximately 6:00a.m., on 29 September 2016, 20 armed officers from the FSB conducted a raid at the home of Bakhrom Khamroev in Moscow, confiscating his technical equipment and documents. During the raid that lasted over eight hours, Bakhrom Khamroev was informed that he was now a witness in the case of two Uzbekistanis who had been charged with terrorism for their alleged involvement in the Islamic political organisation ‘Hizb ut-Tahrir’. The human rights lawyer had previously given legal assistance to the two Uzbekistanis in a separate case.

Bakhrom Khamroev was detained and brought to the headquarters of the FSB in Moscow, where he was questioned for more than an hour on his knowledge of the two defendants and also his political viewpoints. He was later released, and warned that he would be summoned for further questioning.

This is not the first time Bakhrom Khamroev has been targeted due to his human rights work. He was attacked 5 times by FSB officers  and groups of unknown individuals. While criminal investigations were opened by the Russian authorities in respect to some of the attacks, no suspects were identified or brought to justice. The human rights defender was also convicted on fabricated charges of possession of drugs, and sentenced to 1.5 years imprisonment. He was later released on parole.

Front Line Defenders expresses its grave concern at the raid, confiscation of belongings, detention and questioning of human rights defender Bakhrom Khamroev. It believes this to be an attempt to intimidate the human rights defender and prevent him from continuing his legitimate and peaceful work in the defence of migrant workers and citizens of Uzbekistan residing in the Russian Federation.

Front Line Defenders calls on the authorities of the Russian Federation to:

1. Immediately cease the judicial harassment of Bakhrom Khamroev, as Front Line Defenders believes that this is solely as a result of his legitimate work in defence of human rights;

2. Return all equipment and documents confiscated during the raid, as they are manifestly not linked to any criminal activity;

3. Take all necessary measures to guarantee the physical and psychological integrity and security of Bakhrom Khamroev;

4. Guarantee in all circumstances that all human rights defenders in the Russian Federation are able to carry out their legitimate human rights activities without fear of reprisals and free of all restrictions.