About Raed Fares
Status:
Killed
About the situation

On 23 November 2018, human rights defender Raed Fares was shot dead by unknown assailants in the Kafranbel, a town close to Idlib in northwestern Syria. 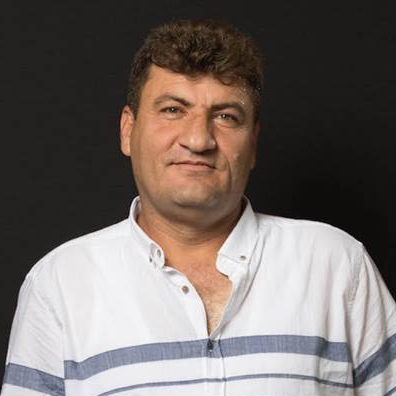 Raed Fares was the founder of the Kafranbel Media Centre, an independent organisation that documents and organises protests in support of the respect of human rights, freedom and peace in Syria. The protests organised by the human rights defender and his colleagues in Kafranbel have gained widespread attention in recent years due to their creative banners and signs in English, which are designed to reach a wide audience. As an attendee at the Front Line Defenders Seventh Dublin Platform in October 2013, he stated that the people of Kafranbel will not condone neither the violence of the state regime, nor of the armed groups in Syria.

On 23 November 2018, human rights defender Raed Fares was shot dead by unknown assailants in the Kafranbel, a town close to Idlib in northwestern Syria.

On the morning of 23 November 2018, there was a drive-by shooting in Kafranbel during which shots were fired from unknown assailants with a machine gun. According to witnesses, the shooting resulted in several casualties, among them human rights defender Raed Fares and his friend, the media activist and press photographer Hamoud Juneid.

There was a previous assasination attempt against Raed Fares; on 29 January 2014, unknown gunmen shot the human rights defender and two bullets hit him in the right arm and shoulder. Raed Fares' colleagues at that time reported that before the attack he had been receiving threats of abduction from radical armed groups in the area. Furthermore, on 28 December 2013, militants from the Islamic State of Iraq and Greater Syria (ISIS) stormed and vandalised the Kafranbel Media Centre.

Front Line Defenders urges the authorities in Syria to:

2. Carry out an immediate, thorough and impartial investigation into the assassination of Raed Fares with a view to publishing the results and bringing those responsible to justice in accordance with international standards;

3. Take all necessary measures to guarantee the physical and psychological integrity and security of human rights defenders in Syria.

4. Guarantee in all circumstances that all human rights defenders in Syria are able to carry out their legitimate human rights activities without fear of reprisals and free of all restrictions.