About Margoth Escobar
Status:
Imprisoned
About the situation

On 24 August 2015, at 4:30 pm, an appeals hearing will take place concerning the preventive detention of 61-year-old human rights defender Ms Margoth Escobar who was arbitrarily arrested and detained on 13 August 2015. 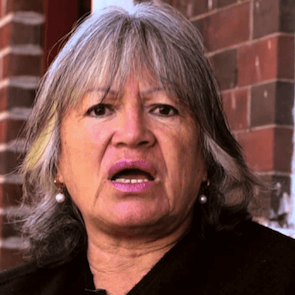 Margoth Escobar is a well-known environmental and indigenous rights defender and has worked since the 1970s in the promotion of the rights of indigenous peoples from the Amazon region.

On 24 August 2015, at 4:30 pm, an appeals hearing will take place concerning the preventive detention of 61-year-old human rights defender Ms Margoth Escobar who was arbitrarily arrested and detained on 13 August 2015.

The human rights defender was violently arrested in the aftermath of a general strike and demonstration in the town of Puyo, despite the fact that when she was detained, the demonstration had already finished. Margoth Escobar remains in preventive detention, despite her deteriorating health and necessity for medical attention for injuries sustained during her arrest.

Margoth Escobar is a well-known environmental and indigenous rights defender and has worked since the 1970s in the promotion of the rights of indigenous peoples from the Amazon region. Her work as a human rights defender began when she participated in the establishment of the Provincial Union of Peasant Organizations of Manabi (Unión Provincial de Organizaciones Campesinas de Manabí) in 1975, an organisation which has played a major role in the recovery of the lands of several rural families in the Manabí province. She has also collaborated with Radio Puyo, which has been a strong voice advocating for indigenous rights in the region.

On 13 August 2015 trade union workers and indigenous organisations including Confederación de Nacionalidades Indígenas del Ecuador - Conaie (Confederation of Indigenous Nationalities of Ecuador) organised a general strike and demonstration. Recently, a number of demonstrations have taken place in Ecuador calling for agrarian reform and improved access to health services, as well as opposing large-scale mining projects and the signing of a free trade agreement with the European Union. The demonstration on 13 August also criticised proposed constitutional amendments that would allow the President Rafael Correa to run for re-election indefinitely.

On 13 August 2015, at approximately 9pm, Margoth Escobar was arrested at Plaza 12 de Mayo. Members of the police are reported to have used excessive force during the detention of the human rights defender and she was told that she was under arrest by “orders of the Governor of Puyo”. Following the arrest, Margoth Escobar was brought to the police station in Via Macas, Puyo. Following complaints by her family about her deteriorating health, Margoth Escobar was taken to see a doctor at Puyo's IESS hospital. There she was diagnosed with high blood pressure and several trauma injuries, and the doctor recommended that she be admitted to the hospital for further care. This request was denied and, at approximately 3am on 14 August 2015, she was transferred to Putuime detention centre.

Following her medical examination, on 14 August 2015, a medical expert gave the Prosecutor's Office a certificate stating that Margoth Escobar needed rest and recommended that she be taken back to the IESS hospital. Margoth Escobar was once again transferred to hospital to receive medical care. The judge assigned to her case decided to continue with the hearing, despite the human rights defender recovering in hospital, and therefore at approximately 7pm a closed-door hearing was held at the hospital where she was receiving treatment. Her son, Mr Yankuam Escobar, had to insist on being allowed to attend the hearing. Her lawyer requested protective measures for Margoth Escobar, which were denied by the judge for “falta de prueba de arraigo familiar y social en la ciudad” (lack of evidence of familial or social roots in the city). The ruling determined that she should remain in preventive detention for a period of 30 days, as she was allegedly disturbing the peace in the town.

On 15 August 2015, Margoth Escobar was informed that a memorandum had been received from the Ministry for Justice, Human Rights and Religion for her transfer to Cuenca Detention Centre, allegedly for security reasons. However, this memorandum was denied. The human rights defender was transferred back and forth between the detention centre and the hospital over the next few days, and is currently in detention at Putuime. The human rights defender's lawyer has appealed the decision concerning her preventive detention and an appeals hearing will be conducted on 24 August 2015.

Front Line Defenders is gravely concerned at the arbitrary detention of Margoth Escobar, particularly given her deteriorating state of health, for which it appears she has not been granted adequate access to medical care. Front Line Defenders calls on the authorities to immediately and unconditionally release Margot Escobar from preventive detention, as it is believed to be an attempt to prevent her from carrying out her peaceful and legitimate work in defence of human rights.