On 12 July 2018 Human rights defenders Abdellahi Matalla Saleck and Moussa Bilal Biram were released from prison. They had served two years of a three year sentence for “incitement of a non-armed assembly with the goal of threatening public order”, in relation to a riot they did not take part in. 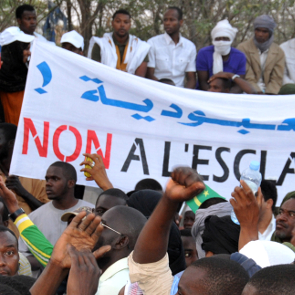 Abdellahi Matalla Saleck is the leader of the Initiative pour la Résurgence du Mouvement Abolitionniste – IRA branch in Sebkha, a neighbourhood on the outskirts of Nouakchott.  IRA is a Mauritanian organisation that works for the abolition of slavery in the country and that helps victims of slavery rebuild their lives.

On 12 July 2018 Human rights defenders Abdellahi Matalla Saleck and Moussa Bilal Biram were released from prison. They had served two years of a three year sentence for “incitement of a non-armed assembly with the goal of threatening public order”, in relation to a riot they did not take part in. They were detained in a detention centre outside of Bir Moghrein, approximately 1200 kilometres from Nouakchott, far from their families.

Front Line Defenders welcomes the release of Abdellahi Matalla Saleck and Mousa Bilal Biram from prison but regrets the fact that they were ever imprisoned for their peaceful human rights activism.

Human rights defenders Abdellahi Matalla Saleck and Moussa Bilal Biram remain detained in a remote part of Mauritania four months after their transfer from a detention centre in Zouérat. As a result of being held 1200 kilometres from their place of residence, they have been without reasonable access to their lawyers, colleagues, and families since their transfer from Zouérat. The two human rights defenders were transferred with their colleague, Abdallahi Abou Diop, on 19 December 2016 to Bir Moghrein, on the border of Western Sahara. Abdallahi Abou Diop was released from detention on 12 January 2017.

The human rights defenders were formally charged on 18 August 2016, and their legal team filed an appeal on 22 August 2016. On 28 September 2016, all 13 members were transferred to a detention centre in  Zouérat until their appeal was heard on 18 November 2016. Zouérat is approximately 700 kilometres from their home city of Nouakchott. Abdellahi Matalla Saleck, Moussa Bilal Biram and Abdallahi Abou Diop reported incidents of torture and ill treatment during their detention in Zouérat. All 13 defenders’ sentences were reduced; Moussa Bilal Biram and Abdellahi Matalla Saleck’s sentence was reduced to three years imprisonment with one year suspended for incitement of a non-armed assembly with the goal of threatening public order. On 19 December 2017, Moussa Bilal Biram, Abdellahi Matalla Saleck, and Abdallahi Abou Diop were transferred to a detention centre outside of Bir Moghrein, approximately 1200 kilometres from Nouakchott. No reason was given to the human rights defenders or their lawyers for this transfer.

It is reported that the Mauritanian government reserves this detention centre outside of Bir Moghrein for prisoners who have committed serious crimes. Furthermore, IRA-Mauritania was informed that prisoners have died at the detention centre in Bir Moghrein due to poor conditions. In this remote detention centre, Moussa Bilal Biram and Abdellahi Matalla Saleck are reportedly allowed only brief calls with their families and colleagues, and all communications are heavily monitored by guards. The physical distance and the lack of a safe, dependable route from Nouakchott to Bir Moghrein render it impossible for the colleagues and family members of the two defenders to visit.

Front Line Defenders expresses its serious concern at the undue burden that is placed on the families and colleagues of Moussa Bilal Biram and Abdellahi Matalla Saleck resulting from their detention 1200 km away from Nouakchott, and calls on Mauritanian authorities to relocate them closer to their home city in accordance with Rule 59 of the United Nations Nelson Mandela Rules regarding treatment of prisoners: Prisoners shall be allocated, to the extent possible, to prisons close to their homes or their places of social rehabilitation. Furthermore, Front Line Defenders calls on Mauritanian authorities to ensure that the treatment of Moussa Bilal Biram and Abdellahi Matalla Saleck, while in detention, adheres to the conditions set out in the ‘Body of Principles for the Protection of All Persons under Any Form of Detention or Imprisonment', adopted by UN General Assembly resolution 43/173 of 9 December 1988.

On 18 November 2016, the appeal of 13 IRA-Mauritania members’ sentences was heard at the Court of Appeal in Zouérat. Following the hearing, ten members were transported back to Nouakchott and subsequently released, while three were kept in detention in Zouérat.

The Court of Appeal reduced the sentences of all 13 members of IRA-Mauritania, acquitting and releasing three of the 13 members. Jemal Ould Samba, Ousmane Lo, and Ousmane Anne were acquitted as the court found insufficient evidence to uphold their sentence.

For Hamady Lehbouss, Amadou Tidjane Diop, Ahmed Hamdy Hamar Vall, Balla Touré, Kattry Ould M’Barek, Ahmed Mohamed Jaroullah, and Mohamed Daty, the Court of Appeal upheld their conviction on participation in an unrecognised organisation. Their sentences were reduced to one year, with eight months suspended. It was decided that these seven human rights defenders had already served their sentences and thus were released.

The three members of IRA-Mauritania who continue to be held in Zouérat include Abdallahi Abou Diop, whose sentence was reduced to one year, with six months suspended for incitement of a non-armed assembly. The Court of Appeal reduced the sentences of Moussa Biram and Abdellahi Matalla Saleck to three years’ imprisonment, with one year suspended for incitement of a non-armed assembly with the goal of threatening public order.

On 28 September 2016, thirteen human rights defenders from the organisation Initiative pour la Résurgence du Mouvement Abolitionniste Mauritanie – IRA (Initiative for the Resurgence of the Abolitionist Movement) were transferred from Dar-Naim prison in Nouakchott to a detention center in Zouérat, over 700 kilometres away from their families and lawyers. As the appeal against their conviction remains pending, there are concerns that this transfer may affect their access to legal representation and therefore their right to a defence.

IRA-Mauritanie works to eradicate slavery in Mauritania, as many descendants of former slaves are still deprived of their basic human rights, even though slavery was officially abolished in 1981. IRA-Mauritanie was the recent recipient of two international awards for their work, the 2015 Human Rights Tulip Award and the 2016 James Lawson Award from the International Center for Nonviolent Conflict. The president of IRA-Mauritanie, Mr Biram Dah Abeid, received the 2013 Front Line Defenders Award, the 2013 United Nations Prize for Human Rights, and he is a 2016 U.S. Department of State Trafficking In Persons Report Hero.

Between 29 June to 4 July 2016, thirteen members of IRA-Mauritanie, including Mr Abdellahi Matalla Saleck, Mr Amadou Tidjane Diop, and Mr Hamady Lehbouss were arrested in Nouakchott, and taken to different detention centers without being informed of the reasons for their arrests. The arrests followed in the wake of riots which took place near Nouakchott on 29 June 2016, organised by the Hratine people, whose slum the authorities planned to destroy for an alternative development project. Despite the fact that no members of IRA-Mauritanie participated in these riots, the authorities arrested them and sentenced them on 18 August 2016 on diverse counts related to the protests with penalities ranging from 3 to 15 years’ imprisonment.

This judicial harassment of members of IRA-Mauritanie is part of a pattern of judicial harassment against human rights defenders in Mauritania. The President of IRA-Mauritanie, Mr Biram Dah Abeid and the Vice President, Mr Brahim Bilal Ramdhane, were arrested on charges of “illegal assembly and revolt, incitement to revolt, and refusal to respect administrative authorities’ orders”. After 18 months imprisonment, they were released on 17 May 2016 following a decision by the Supreme Court.

Front Line Defenders is concerned about the transfer of the thirteen defenders to Zouarét as it distances them from their families, legal representation, and doctors. In light of the repeated harassment of members of IRA Mauritania, Front Line Defenders believe that this decision may be motivated by their legitimate activities in the defence of human rights.

1. Immediately and unconditionally release the 13 defenders and quash the sentences against them, as Front Line Defenders believes that this judicial harassment comes a result of their legitimate and peaceful work in the defence of human rights;

2. Take all necessary measures to guarantee the physical and psychological integrity and security of the thirteen defenders;

On 30 June 2016, the Mauritanian police arrested two human rights defenders, M. Amadou Tidjane Diop and M. Abdellahi Matalla Saleck, and brought them to two different detention centres. Amadou Tidjane Diop is currently detained at a police station in a neighbourhood of the capital, Nouakchott. Abdellahi Matall Saleck’s family and colleagues do not yet know where he is detained.

The morning of 30 June 2016, around 9am, ten members of the Mauritanian police dressed in civilian clothes stormed into Amadou Tidjane Diop’s residence and proceeded to search his house and arrest him for unknown reasons. It was reported that the police came to the human rights defender’s residence without a warrant, and at the ouset did not make it clear where he would be detained. Abdellahi Matalla Salaeck was arrested on the same day in Nouakchott. Unconfirmed reports suggest that the two arrests are connected with a youth protest the day before that resulted in a confrontation between the youth protestors and the police who tried to disperse them. However, neither Amadou Tidjane Diop nor Abdellahi Matalla Saleck participated in the organisation of the protest and were not present at the event.

It is reported that Amadou Tidjane Diop suffers from cardiac problems. The human rights defender goes frequently to his cardiologist for medical treatment related to his heart condition and he needs to follow a strict schedule for his medication.

Anti-slavery human rights defenders in Mauritania are subjected to harassment and repeated intimidation from the authorities. Just one month ago, M. Biram Dah Abeid and M. Brahim Bilal, who are president and first vice-president of IRA Mauritania, respectively, were released after more than a year and a half in prison. They had been arrested and brought to court after participating in a peaceful campaign aimed at sensitising the population to land rights and rights for descendants of slaves. Additionally, there are reports suggesting that a few other members of IRA Mauritania may have been targeted in a wave of arrests from 30 June to 1 July.

1. Immediately and unconditionally release Amadou Tidjane Diop and Abdellahi Matalla Saleck, as Front Line Defenders believes that they are being held solely as a result of their legitimate and peaceful work in the defence of human rights;

2. Take all necessary measures to guarantee the physical and psychological integrity and security of Amadou Tidjane Diop and Abdellahi Matalla Saleck;