About Chea Mony
Status:
Facing judicial harrassment, attacks and threats
About the Situation 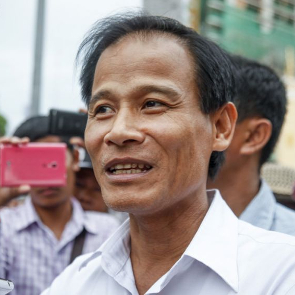 Chea Mony is the former president of the Free Trade Union of Workers of the Kingdom of Cambodia (FTUWKC) and a member of Watch Council of Cambodia. He is the brother of Chea Vichea, the founder of the FTUWKC, who was assassinated on 22 January 2004 in what is suspected to have been a politically motivated killing. Chea Mony’s human rights work includes the promotion of economic and social rights as well as freedom of association and expression. FTUWKC is a national level trade union in Cambodia, which was instrumental in advocating for the minimum wage in Cambodia, and works to promote and protect the rights to livelihood and an adequate standard of living through the creation of jobs and the assurance of decent working conditions and dignity.

On 5 January 2018, Phnom Penh Municipal Court issued a warrant to question Chea Mony. On 18 December 2017, lawyers from 120 different federations and unions filed a criminal case against him for incitement, as provided for under article 495 of the Cambodian Criminal Code. It was in response to comments made by Chea Mony in a radio interview where he appealed to the European Union to stop importing clothing from Cambodia in protest of the dissolution of the Cambodia National Rescue Party – Cambodia’s main opposition party. The lawyers have demanded $1 million in compensation.

On 18 December 2017 at approximately 10:00PM, the same day the case was filed against Chea Mony, a group of unidentified men broke into the defender’s house and captured him. He escaped but was followed for a considerable distance before managing to lose the assailants. Chea Mony also reports that officials from the Ministry of Interior and from the court warned him that his fate would be the same as his brother if he did not leave Cambodia. Many of the union members on the plaintiffs’ side are also high ranking government officials, with one stating his intention to file a lawsuit against the banned former officials of the Cambodia National Rescue Party, raising suspicions about the political motivation behind these cases.

“Incitement” has become a catch-all for authorities or anyone with the support of authorities to take someone to court. Under the new penal code, incitement is vaguely defined in article 495 as directly provoking the commission of a crime or an act that creates "serious turmoil in society" through public speech, writings, drawings or audio-visual telecommunication that are shared with, exposed to, or intended for the public. It does not require the alleged incitement to be effective for penalties to be imposed, which include prison terms of six months to five years and fines.

Front Line Defenders is concerned about the lawsuit against Chea Mony, which it considers to be in retaliation to his pro-democracy stance and his peaceful human rights work in Cambodia.

1. Dismiss the case against Chea Mony;

2. Carry out an immediate, thorough and impartial investigation into the death threats and attack against Chea Mony, with a view to publishing the results and bringing those responsible to justice in accordance with international standards;

3. Take all necessary measures to guarantee the physical and psychological integrity and security of Chea Mony;

4. Cease targeting all human rights defenders in Cambodia and guarantee in all circumstances that they are able to carry out their legitimate human rights activities without fear of reprisals and free of all restrictions including judicial harassment.