About Rasha Azab
Status:
Charged
About the situation

On 13 October 2015, the Cairo Prosecutor interrogated Mr Khaled ElBalshy and Ms Rasha Azab along four other activists for five hours and then released them on bail with multiple charges. 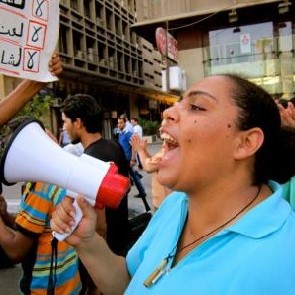 Rasha Azab is a journalist and human rights defender who is known for her work in defence of freedom of expression and assembly.

On 13 October, the Cairo Prosecutor interrogated Mr Khaled ElBalshy and Ms Rasha Azab along four other activists for five hours and then released them on bail with multiple charges.

The Prosecutor charged the human rights defenders with “organising an illegal protest”, “inciting people to protest”, “attacking police officers”, “blocking the traffic”, “chanting slogans against the army and the police” and “belonging to an illegal organisation” in reference to two pro-democracy movements: 6th of April Movement and Revolutionary Socialists Movement'.

Khaled Elbalshy is a prominent journalist and board member of Egypt's Press Syndicate and the head of its Freedoms' Committee. He is also the chief editor of the private Al Bedaiah on line newspaper. Rasha Azab is a well-known journalist who actively speaks about freedom of expression and assembly.

The Cairo Prosecutor began an investigation into this case in June 2014 after Elbalshy, under his capacity as the head of the Freedoms' Committee at the Press Syndicate, and Rasha Azab organised a public conference on 12 June 2014. This was held at the Press Syndicate headquarters in central Cairo in solidarity with political activists, human rights defenders and journalists who had been prosecuted, detained or sentenced to prison under the Assembly Law promulgated by the Egyptian government in November 2013. The government has received heavy criticism for its draconian restrictions on peaceful protests and assemblies. Security forces surrounded the Press Syndicate and attempted to prevent young activists and journalists from joining the conference and briefly arrested some of the participants. At the same time, a group of pro-government and military protesters, holding pictures of Egypt's President Abdel Fattah El Sisi, stormed the conference and physically and verbally attacked its participants.