About Paulino Terena
Status:
Threatened
About the situation

On 31 March 2016, during a hearing before the Parliamentary Commission of Inquiry which is investigating the killings and violence against indigenous persons and the State's alleged omission in these cases, indigenous leader Paulino Terena was prevented from giving his testimony before the CPI as he asked for a translator for his indigenous mother tongue, Terena. Although there was a translator present in the session, some members of the CPI vehemently opposed to his idea, saying that he could speak in Portuguese and that he should speak Portuguese, even though it was Paulino Terena's constitutional right to speak in his native tongue. 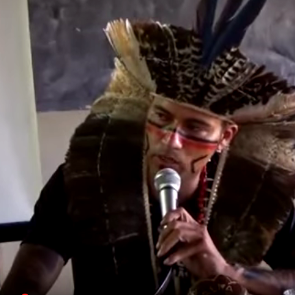 Paulino Terena is an indigenous rights defenders and indigenous leader of the Terena people, an indigenous group who live in the provinces of Mato Grosso, Mato Grosso do Sul, and São Paulo. He has worked to denounce and expose the killings committed against indigenous persons in Brazil and he is currently under the protection of the National Programme for the Protection of Human Rights Defenders.

On 11 April 2016, human rights defender and Tupinambá indigenous leader Mr Rosivaldo Ferreira da Silva was placed under house arrest after being arbitrarily arrested on 7 April 2016 by the military police (polícia militar) in the state of Bahia, Northeastern Brazil. This follows previous incidents of threats and intimidation against indigenous rights defenders in Brazil. On 5 April 2016, Mr Tonico Benites received an intimidatory text message and on 31 March 2016 Mr Paulino Terena was prevented from giving testimony in his native language before a Commission established to investigate the killings of indigenous persons in Brazil.

On 11 April 2016, the Federal Court of Ilhéus (Vara única de Ilhéus), Bahia, ordered that Cacique Babau and his brother, Mr José Aelson Jesus da Silva, known as Teity Tupinambá, be released from the State Prison of Ilhéus and placed under house arrest. The human rights defender and his brother were arbitrarily arrested on 7 April 2016, in the city of Gravatá for allegedly carrying an illegal firearm. Cacique Babau claims that the weapons were deliberately planted on him and his brother. They are being charged with the crimes of illegal firearm carrying, bodily harm, threats, resisting arrest and contempt of authority. The arrest followed Cacique Babau's visit to the indigenous territory in Olivença to observe the situation of the community following a violent land recuperation operation conducted by the military police. The disputed lands in question have been recognised as Tupinambá indigenous territory, but the demarcation is still pending. Meanwhile, tensions have escalated between indigenous communities and those working on illegal sand mining in the region (caçambeiros).

Prior to this incident, on 5 April 2016, human rights defender and indigenous leader Tonico Benites received a threatening text message stating that he should “stop showing that video” otherwise he would suffer terrible consequences. The message refers to a video presented by Tonico Benites in a hearing before the Parliamentary Commission of Inquiry (Comissão Parlamentar de Inquérito – CPI) which is investigating the killings and violence against indigenous persons and the State's alleged omission in these cases. The video shows violent land recuperation operations conducted against indigenous peoples in Mato Grosso do Sul.

During the above-mentioned hearing, on 31 March 2016, indigenous leader Paulino Terena was harassed. The human rights defender was prevented from giving his testimony before the CPI as he asked for a translator for his indigenous mother tongue, Terena. Although there was a translator present in the session, some members of the CPI vehemently opposed to idea, saying that he could speak in Portuguese and that he should speak Portuguese, even though it was Paulino Terena's constitutional right to speak in his native tongue.

Because of their human rights work Cacique Babau, Tonico Benites and Paulino Terena have been  facing different forms of intimidation and harassment in the past number of years. Cacique Babau was first arbitrarily arrested back in 2008 and since this time, the human rights defender has been subjected to constant police and judicial harassment. Tonico Benites has been facing escalating threats since the revisiting of the land dispute in Mato Grosso do Sul in 2015, even though he and Paulino Terena, who was the victim of an assassination attempt in 2013, were beneficiaries of the National Programme for the Protection of Human Rights Defenders when the above-mentioned incidents occurred. The indigenous rights defenders have claimed to be in constant danger despite  the protection measures issued in the National Programme by the Brazilian government. The situation is such that the defender's have implemented their own security measures to ensure their safety such as often changing and moving between locations.

Front Line Defenders strongly condemns the harassment, threats and intimidation against human rights defenders and indigenous leaders Cacique Babau, Tonico Benites and Paulino Terena of, respectively, the Tupinambá, Guarani-Kaiowá and Terena peoples, which it believes to be directly linked to their role in the defence of indigenous rights. Front Line Defenders expresses further concern about attacks, threats, harassment and other forms of intimidation against indigenous leaders in Brazil, as well as the use of excessive force and criminalisation against these communities.

Front Line Defenders urges the authorities in Brazil to:

1. Guarantee the implementation of the protection measures issed by the National Programme for the Protection of Human Rights Defenders in favour of Cacique Babau, Tonico Benites and Paulino Terena;

2. Drop all charges against Cacique Babau and his brother, and release them, as it is believed they are solely motivated by Cacique Babau's peaceful and legitimate work in defence of human rights;

3. Take all necessary measures, in consultation with the human rights defenders and/or their representatives, to guarantee the physical and psychological integrity and security of Cacique Babau, Tonico Benites and Paulino Terena;

4. Carry out an immediate, thorough and impartial investigation into the threats against Tonico Benites, with a view to publishing the results and bringing those responsible to justice in accordance with international standards;

5. Cease any form of harassment against indigenous rights defenders attending the hearings before the Parliamentary Commission of Inquiry;

6. Guarantee in all circumstances that all human rights defenders in Brazil are able to carry out their legitimate human rights activities without fear of reprisals and free of all restrictions.