About Claudia Samayoa
Status:
Threatened
About the situation

On 21 April 2013, the Foundation Against Terrorism, an organisation set up by former military officials and military supporters, published a document accusing Claudia Samayoa of trying to blame the National Civil Police for violent clashes with local community. The human rights defender had previously been the victim of threats and defamatory statements. 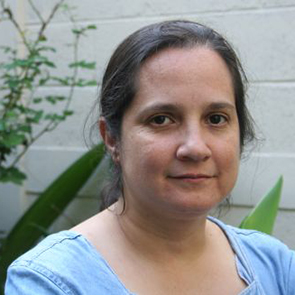 On 21 April 2013 human rights defender MsClaudia Virginia Samayoa was accused, in a document published by the Fundación Contra el Terrorismo(Foundation Against Terrorism), of trying to blame the National Civil Police (PNC) for violent clashes between them and local communities.

On 21 April 2013 the Foundation Against Terrorism, an organisation set up by former military officials and military supporters, published a 20-page document entitled La Farsa del Genocidio en Guatemala – Conspiración Marxista desde la Iglesia Católica (The Farce of Genocide in Guatemala – a Marxist Conspiracy by the Catholic Church). In this document a photograph of Claudia Virginia Samayoa was published and she is accused of trying to blame the PNC for violent clashes with local community. The human rights defender has previously been the victim of threats and defamatory statements, and was the subject of a Front Line Defenders urgent appeal on 21 November 2012 when she was accused of inciting violent clashes.

The break-in at UDEFEGUA office in Nebaj took place on 18 April 2013, after the suspension of the trial of two military personnel accused of genocide and crimes against humanity. As a result of ongoing threats against the organisation, UDEFEGUA had taken security precautions and did not leave computers or documentation at the office in Nebaj. There was evidence that during this break-in the perpetrators had attempted to search for information and files. The break-in was reported to police on the evening that it occurred, and the organisation is awaiting further investigation. UDEFEGUA is keen to clarify that only the organisation has been affected by the break-in.

Front Line Defenders believes that UDEFEGUA has been targeted solely as a result of its peaceful and legitimate work in the defence of human rights, in particular its work in protecting witnesses in the trial against Efraín Rios Montt.

During the week of 12 November 2012, human rights defender Ms Claudia Virginia Samayoa received warnings of an attack being prepared against her, in the latest incident in an ongoing series of threats and defamatory statements targeting her and several other human rights defenders.

On 5 November 2012, she filed a complaint with the Inter-American Commission on Human Rights denouncing a statement, then in circulation, in which she and several others were threatened and accused of involvement in terrorist activities and fuelling anti-business hostility. The statement, which is believed to have been delivered at a press conference on 15 October 2012, had reportedly been circulated and forwarded for several days before it came to Claudia Samayoa's attention on 19 October 2012. The statement originates from the Fundación Contra el Terrorismo (Foundation Against Terrorism), and mentions Claudia Samayoa by name as someone with anti-business and terrorist sympathies. It claims she expressed this by financing “destabilizing organisations” and partaking in a conspiracy with two other civil society figures, who are accused of being ex-guerrillas who took part in the torture and kidnapping of the Foundation Against Terrorism's director in 1982.

The document goes on to link the human rights defender to a number of recent violent clashes between the military and local populations in which members of the military were injured, and implies that Claudia Samayoa and others were responsible for these events through “incitement”. The last part of the document is a direct call on state authorities and the armed forces alike to ensure that all those it deems complicit in “political trials” against the military be held responsible and forced to pay for having attempted to change history. During the week of 12 November 2012, both Claudia Samayoa and a member of the Human Rights office of the Archbishop of Guatemala received warnings of an attack being prepared on their lives.

The home of human rights defender Ms <b>Erenia Vanegas</b> was broken into on 5 March 2010 and the car of Ms Claudia Samayoa was tampered with in an attempt to cause an accident on 2 February 2010.

Erenia Vanegas is an investigator with the Unidad de Protección de Defensoras y Defensores de Derechos Humanos Guatemala – UDEFEGUA (Unit for the Protection of Human Rights Defenders in Guatamala) and Claudia Samayoa is the coordinator of the same organisation.

UDEFEGUA supports the work of human rights defenders in preventing and responding to security risks, through monitoring, verification and advocacy work. UDEFEGUA has recently been investigating various cases of human rights defenders in Guatemala, including the defamation campaign against the San Juan Sacatepéquez movement and the murders in Malacatán. The organisation has also recently documented irregularities within the Ministry of Governance.

On the morning of 5 March 2010, a group of men broke into the home of Erenia Vanegas. According to her neighbours, a young man came to the house and knocked on the door but left when neighbours informed him that there was no one in the house.

Shortly after, a black car with tinted windows pulled up outside the house and several men emerged. The men quickly forced the door to the house open and spent approximately five minutes inside the house before leaving in the same car. Nothing was stolen in the incident but it was clear that the wardrobes in the rooms nearest the entrance and a box containing documents had been searched.

On 23 February 2010, the first hearing in the case against Ms Silvia Ruiz, former administrator of the Asociación para el Estudio y la Promoción de la Seguridad en Democracia – SEDEM (Association for the Study and Promotion of Security in a Democracy) took place.

Between 30 April and 3 May 2009, more than 30 threatening text messages were sent to members of UDEFEGUA and SEDEM from the mobile phone of Silvia Ruiz and from two other unidentified numbers. While the investigations carried out by the human rights unit of the Attorney General's office concluded that Silvia Ruiz was responsible for the threatening messages, in the hearing on 23 February 2010, the judge cleared Silvia Ruiz of the charges and suggested that the cloning of telephone numbers should not be ruled out in the case. This ruling is being appealed.

On 2 February 2010, Claudia Samayoa's car was tampered with. A quantity of oil was poured under the driver's seat which ran under Claudia Samayoa's feet when she was driving, causing the pedals to become slippery. Claudia Samoyoa was driving quite slowly at the time and so managed to stop the car without causing an accident. This incident occurred on the same day that a meeting of the Instancia de Análisis de Ataques en contra de Defensores de Derechos Humanos (Institute of the Analysis of Attacks on Human Rights Defenders) took place.

Front Line believes that the break-in at the home of Erenia Vanegas, the tampering with Claudia Samayoa's car and the threats against members of UDEFEGUA and SEDEM are directly related to their human rights work, in particular their efforts to provide protection for human rights defenders in Guatemala. Front Line fears for the physical and psychological integrity of Erenia Vanegas, Claudia Samayoa and members of SEDEM.

On 20 May 2007 intruders broke into the office of ActionAid in Zone 13 of Guatemala City and stole computer hard-drives containing files on ActionAids work in Guatemala. No other items of value were taken. ActionAid is the fifth member of the International Forum of NGOs to be attacked in the last month.

Front Line is deeply concerned over this recent upsurge in attacks against human rights organizations in Guatemala and in particular a series of violent attacks against the Consejería en Proyectos , Project Counselling Service (PCS) and its staff members.

On 17 May 2007, a staff member of PCS received a threatening telephone call at his home. The caller said: "Son of a b…, it wasn't enough… We told you not to do anything. You don't understand. We are going to kill your ass and all the superficial whores in your office. We know who they are and what they do. Don't screw up, and leave things as they are".

The call came ten days after an incident on 7 May 2007 when two armed men robbed a vehicle belonging to the PCS and also some money. The same staff member of the PCS that received the telephone call was in the car during the robbery and was temporarily detained by the two men who proceeded to abuse him, verbally, physically and sexually. The attack occurred during an international seminar on sexual violence, Sharing Collective Memory: Psychosocial Attachment and Integral Justice for Women Victims of Sexual Violence in Armed Conflict, that was organized by the PCS.

The PCS is an international organization dedicated to challenging impunity and the search for justice for human rights violations carried out during the conflict and post-conflict periods in Latin America.

On 14 November 2006, Front Line Guatemala Attacks Against Human Rights Defenders 2000-2005 was launched in Guatemala City. The report was researched and written by Claudia Samayoa of the National Movement for Human Rights.

The report outlines the upsurge in attacks on human rights defenders over the past five years, including a dramatic increase in attacks against defenders of economic, social and cultural rights. The report also demonstrates that the increase in the number of attacks shows evidence of planning, indicating that this is an organised assault on the right to defend human rights.