About Carlos Pérez Guartambel
Status:
Assaulted
About the situation

On 8 December 2015, indigenous leader and human rights defender Mr Carlos Pérez Guartambel went to the hospital for the third time in connection to an attack he suffered in the aftermath of a series of protests in Ecuador on 3 December 2015. 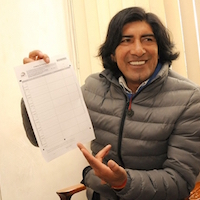 As well as being a human rights defender, Carlos Pérez Guartambel is also an indigenous leader and the president of Confederación de Pueblos de la Nacionalidad Kichwa del Ecuador – ECUARUNARI (Confederation of the Kichwa Indigenous Nationalities of Ecuador), an organisation whose main objective is to promote awareness of human rights abuses against indigenous communities and achieve the protection and promotion of human rights in Ecuador, particularly the rights of indigenous peoples.

On 8 December 2015, Carlos Pérez Guartambel was discharged from Hospital Vicente Corral Moscoso a few days after he was brutally assaulted by mounted police officers during a peaceful demonstration in Quito on 3 December 2015. That was the human rights defender's third visit to a hospital to seek treatment in relation to the violence he suffered. As a result of the attack the human rights defender suffered multiple injuries, receiving 11 stitches on his face and head. Carlos Pérez Guartambel was also reported to be urinating blood as a consequence of internal bleeding caused by the attack.

The attack happened on 3 December 2015, in the context of a series of demonstrations in different parts of Ecuador aimed at opposing the recent approval of constitutional amendments authorising President Correa to run indefinitely for re-election. Ecuadorian human rights defenders also reported that twenty-one protesters were arrested and sentenced to 15 days in prison for “offending the honour of police officers” in a summary trial on the day following the arrest.

Incidents of persecution, threats and harassment against human rights defenders and indigenous leaders have increased since August 2015, when many human rights defenders, including Carlos Pérez Guartambel, participated in the Marcha de la Confederación de Nacionalidades Indígenas del Ecuador - Conaie (March of the Confederation of Indigenous Nationalities of Ecuador).

Ecuador's police has regularly used excessive force when disrupting protests. They have justified such action by pointing out the presence of disruptive individuals in the demonstrations. The Special Rapporteur on the rights to freedom of peaceful assembly and of association, Maina Kiai, has repeatedly stated that police have the duty to distinguish between peaceful demonstrators and agents provocateurs and that the presence of a few people engaging in violence in and around a protest does not authorize police to violently disrupt the whole demonstration or to use force against or arrest any protester indiscriminately.

On 13 August 2015, the human rights defenders were arbitrarily detained with force during the Marcha de la Confederación de Nacionalidades Indígenas del Ecuador - Conaie (March of the Confederation of Indigenous Nationalities of Ecuador). This peaceful march, which began in Zamora Chinchipe province on 2 August and made its way to Quito, was organised by indigenous groups to call for agrarian reform based on food sovereignty and better access to health services, and against large scale mining projects and the signing of a free trade agreement with the European Union. The march was also against proposed constitutional amendments that would allow President Rafael Correa to run for re-election indefinitely, having being in power since 2007. Several other people were also arrested during the event.

Throughout the month of August thousands of people in Ecuador have gathered in different parts of the country to protest against President Correa's proposed amendments to the constitution. On 13 August 2015, at approximately 7pm, when demonstrations were being held in Quito, the human rights defender Carlos Pérez was arrested, along Salvador Quishpe. Manuela Picq was attempting to film the violent arrests on her camera when she too was detained and beaten by police. It is believed that the human rights defenders, who were peacefully protesting, were targeted as a result of their roles as leaders and organisers in the event.

All three were released later the same day, although each with visible signs of beatings. Manuela Picq has not had her camera returned to her by the police. All three human rights defenders were taken to the Interior Ministry before being taken to different hospitals for treatment for their injuries sustained during the arrest. Manuela Picq was briefly hospitalised at Eugenio Espejo Hospital and on 14 August 2015, at approximately 1 am she was transferred to a private clinic. Later that day she was taken to the Immigration Unit (Coordinación Zonal 9 de la Unidad de Migración) where she received a document signed by Judge Juan Carlos Estrella Sampedro informing her that her visa had been cancelled. Manuela Picq is now facing deportation to Brazil as she entered Ecuador on her Brazilian passport. She holds dual French and Brazilian citizenship.