About Elena Semenova
Status:
Home attacked
About the situation

On 9 October 2018, unidentified assailants attempted to set the house of Elena Semenova on fire with Molotov cocktails. It is not the first time the woman human rights defender is being targeted as she faces ongoing judicial harassement. 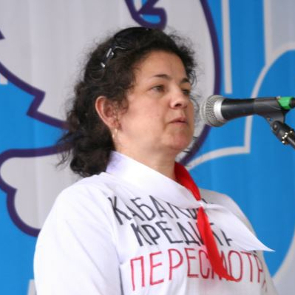 Elena Semenova is a human rights defender and Chairperson of the Public Monitoring Commission (PMC) in the Pavlodar region of Kazakstan, as well as the Head of the public association Leave the People Their Housing. She is also a member and one of the initiators of the Relatives Against Torture movement. Pavlodar PMC is actively involved in the monitoring of prison conditions and has helped to document cases of torture and cruel, inhumane or degrading treatment or punishment, and to bring them to the attention of the authorities. Relatives Against Torture movement provides a platform for visibility of ill-treatment and torture in prisons. Leave the People Their Housing is an organisation that campaigns, litigates and advocates for the housing and property rights of individuals who have lost their homes and lands due to forced evictions.

On 9 October 2018, unidentified assailants attempted to set the house of Elena Semenova on fire with Molotov cocktails. It is not the first time the woman human rights defender is being targeted as she faces ongoing judicial harassement.

Around 3 p.m. on 9 October 2018, Elena Semenova received a call from her husband who found damages on the windows and two Molotov cocktail bottles next to their family house in Pavlodar. One of the bottles did not break, however, the other one ignited outside when it smashed against the window bars, which prevented the bottle from flying into the house. Luckily, nobody was at home when the attack happened.

On 8 October 2018, Elena Semenova was not allowed to leave the airport of Almaty from where she was supposed to fly to Strasbourg in order to meet with the President and Members of the Parliamentary Assembly of the Council of Europe. The Kazakh authorities deny that there is an official travel ban imposed on Elena Semenova.

On 20 July 2018, Elena Semenova was arrested at her home in Pavlodar by three police officers on charges of "spreading false information" under Article 274 of the Criminal Code of Kazakhstan in relation to statements that she had previously made to Members of the Parliamentary Assembly of the Council of Europe. In the process of the investigation, the police confiscated her computer to which the security system of her house was connected. When she complained about the risks that she had to face as a result of it, the local authorities responded that there were no threats to her security.

Elena Semenova was previously targeted in 2016 by Kazakh authorities when she was detained and sentenced for picketing outside the Atyrau City Court building, where a court hearing for the case against human rights defenders Talgat Ayan and Max Bokaev was about to begin.

Front Line Defenders expresses its concern about the attack on the house of Elena Semenova as it believes that it was committed in reprisal for her peaceful and legitimate work in the defence of human rights and underlines the risks that she and her family members are facing.

Front Line Defenders urges the authorities in Kazakhstan to:

1. Take all necessary measures to guarantee the physical and psychological integrity and security of Elena Semenova as well as of the members of her family;

2. Carry out an immediate, thorough and impartial investigation into the attack against Elena Semenova, with a view to publishing the results and bringing those responsible to justice in accordance with international standards;

3. Lift the travel ban on Elena Semenova as it is believed that this measure has been taken against her solely on account of her legitimate and peaceful work in defence of human rights;

4. Immediately drop all charges against Elena Semenova as it is believed that they are solely motivated by her legitimate and peaceful work in defence of human rights;

5. Guarantee in all circumstances that all human rights defenders in Kazakhstan are able to carry out their legitimate human rights activities without fear of reprisals and free of all restrictions, including judicial harassment