About Claudia Elizabeth Hernández Herrera
Status:
Harassment
About the situation 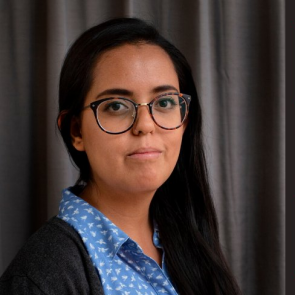 Claudia Elizabeth Hernández Herrera is a human rights lawyer from in Mexico, originally from the city of San Luis Potosí, in the State of San Luis Potosí. Claudia Elizabeth is a graduate from the School of Transnational Justice (EJT), an initiative promoted by the Economic, Social and Cultural Rights Project (ProDESC A.C.) The EJT promotes education and training of human rights defenders in order to enhance the defence and promotion of Economic, Social and Cultural Rights (ESCR) in Mexico.

Claudia Elizabeth Hernández Herrera is a human rights lawyer whose work focuses on indigenous people’s and land rights, working with peasant and indigenous communities in the town of Cerro de San Pedro in the State of San Luis Potosí. Kenia Inés Hernández Montalván is the coordinator of the group Zapata Vive, a social movement which advocates for land rights and promotes peaceful demonstration against neo-liberal development models imposed by the Mexican State. She is also a leader of the National Movement for the Freedom of Political Prisoners. Both graduated from the Transitional Justice School (EJT) of the ProDESC Institute, which promotes the training of human rights defenders in order to enhance the protection and defence of economic, social and cultural rights in Mexico.

On 5 June 2020 at about 7:30 pm, Claudia Elizabeth Hernández Herrera was arbitrarily detained in the city of San Luis Potosí whilst attending a demonstration against police violence as a human rights observer. The demonstration was organised in protest against the killing of Giovanni López in the State of Jalisco on 4 May 2020. The woman human rights defender was physically assaulted by police officers and held in detention for eight hours without contact with her lawyer or family. She was then brought to the San Luis Potosí Prosecutor's Office where she was charged with rioting and property damage, following a complaint filed by the State Congress. Claudia Elizabeth Hernández Herrera was held in arbitrary detention for two days and eventually released on 7 June at about 6:00 am. She has not been made aware of a scheduled hearing or any other procedural action following the charges against her.

Since early May, several states in Mexico, including Mexico City, Baja California, Querétaro, Coahuila, Morelos, Veracruz, Yucatan, San Luis Potosí, Nuevo León and the State of Mexico, have experienced awave of protests against police violence. The protests erupted in reaction to the killing of Giovanni López, a young construction worker, by police, who had arrested him for not wearing a protective face mask in the context of COVID-19. Since the beginning of June, dozens of protesters have been seriously injured.. In the state of Jalisco, protesters detained by police were purposefully released in remote, high-risk areas where drug cartels are known to operate. Some of the protesters that were released showed clear signs of torture, and cruel, inhumane or degrading treatment from their time in policy detention.

On the night of 6 June at around 10:00pm, state police arbitrarily detained human rights defender Kenia Inés Hernández Montalván, along with three minors, near the Hortaliza-Valle de Bravo toll in the State of Mexico. The defender and at least 40 other people were demonstrating near the toll, demanding the release of two young people who had been detained for over nine months in the Buena Vista community in the municipality of San Luis de Acatlán.

The arrest of the defender and the three minors occurred after a confrontation between two toll booth workers and officers in at least 10 patrol cars from the Public Security of the State of Mexico. The two workers tried to prevent the passage of the police who were attempting to arrest the defender and the three minors without an arrest warrant. The defender, who since September 2019 has been a beneficiary of the Federal Mechanism for the Protection of Human Rights Defenders and Journalists, was eventually detained by police and brought to Chiconautla prison, Ecatepec in the State of Mexico. She remains in detention at the time of writing and has not been made aware of the charges that have been brought against her. A preliminary hearing is scheduled for 11 June.

Kenia Inés Hernández Montalván and several members of Zapata Vive have been subjected to persistent threats and political persecution since February 2019, two months after the establishment of the National Movement for the Freedom of Political Prisoners. In April 2019, members of the Zapata Vive movement reported serious threats by members of the state government. The following month, members of the movement reported incidents of surveillance by the state police and in June, Kenia Inés Hernández Montalván began to receive a series of threats. By September, the threats had escalated to death threats and she was forced to relocate for fear for her life.

Front Line Defenders is seriously concerned by the arbitrary detention of Claudia Elizabeth Hernández Herrera and Kenia Inés Hernández Montalván, and for their physical and psychological integrity as a result of the violent nature of their arrests and time in detention. Front Line Defenders is also concerned by the lack of basis for their arrests, absence of an arrest warrant in both cases., and the detention conditions of Kenia Inés Hernández Montalván and her limited access to lawyers and family.

Front Line Defenders believes that these arbitrary detentions and the previous threats and acts of surveillance are part of a comprehensive strategy to intimidate land and indigenous people’s rights defenders and defenders of the rights of political prisoners. It also believes that the use of baseless charges has become an effective strategy to intimidate those who work in defence of human rights in Mexico. Front Line Defenders believes that the arbitrary detention of the two defenders and the police brutality they have been subjected to is in direct reprisal for their peaceful and legitimate work in defence of human rights.