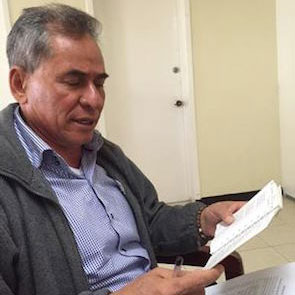 David Ravelo Crespo has been demanding justice for victims of extra-judicial killings, forced displacement and government corruption in Colombia for more than 30 years. He produced evidence implicating former President Uribe in the activities of right wing death squads and was targeted as a result. David was detained for a crime he didn't commit and accused of murder. He is currently serving 18 years and three months imprisonment on fabricated charges, following an unfair trial.

The case against David Ravelo Crespo is so flawed and the evidence against him is so tainted that his conviction is untenable. David was charged with being the mastermind behind the killing of a local official from the town of Barrancebermeja in 1991. However, the trial was riddled with irregularities which called into question the integrity of the proceedings.

In the first instance the main prosecutor in the trial had been forced to resign from a previous post as a police officer due to his involvement in the enforced disappearance of a young man in 1991. Under Colombian law this automatically disqualifies a person from the exercise of any future employment in the prosecution service. On this basis alone the case against David should have been thrown out and a re-trial ordered.

Notwithstanding the fact that the charges against David were clearly politically motivated and the case procedurally flawed, the evidence against him has been largely discredited. One witness for the defence testified that some of the witnesses for the prosecution had tried to bribe him to support the accusations against the human rights defender. In addition, witnesses for the prosecution gave contradictory evidence and evidence which has been proven to be false.

The main evidence against David was given by an ex paramilitary group member Mario Jaimes Mejias known as El Panadero (the baker). In March 1999 the provincial courts found Jaimes Mejias guilty of involvement in two paramilitary massacres which took place in Barrancabermeja on 16 May 1998 and 28 February 1999. Under the Justice and Peace Law former paramilitaries can get reduced prison sentences in exchange for full confessions regarding their participation in paramilitary actions. Invoking this law in an attempt to reduce his 40 year sentence Jaimes Mejias accused David Ravelo Crespo of instigating the murder of the Secretary for Public Works of Barrancabermeja David Nuñez Cala. Despite the absence of any corroborating evidence this is the basis of the case against David.

One of the several scandals currently facing the Colombian government is the recently discovered existence of a cartel of false witnesses who were available to give evidence for hire in cases such as that of David Ravelo Crespo. Jaimes Mejias is currently on trial on charges of giving false evidence.

The other scandal confronting the government is the discovery of the body parts of an estimated 100 people in the sewers underneath La Modelo prison in Bogota where Jaimes Mejias is being held. The bodies are believed to be linked to a settling of scores between political factions. Investigators suspect Jaimes may be behind some of these disappearances at La Modelo prison as he ran one of the prison yards from which a number of inmates are reported to have gone missing.

The issue of human rights abuses inside the prison system was first investigated by Colombian journalist Jineth Bedoya. On 25 May 2000 Ms Bedoya was kidnapped at gunpoint as she was waiting to enter La Modelo to meet Jaimes Mejias, who had promised her information. She was then taken to an unknown location where she was beaten and raped, before being dumped in another part of the city. Earlier this month Jaimes Mejias confessed to ordering Ms Bedoya's kidnapping.

Meanwhile the State Prosecutor is pursuing another case against Jaimes Mejias on charges of having ordered from prison the assassination of the rector of the 26thof March School in Barrancabermeja.

So, we have the situation where one of the most respected human rights defenders in the country is still in prison based on the evidence of a man who is devoid of credibility, who has been directly and indirectly connected to serious crime and who is being prosecuted by the state itself for perjury. It is not David Ravelo who is on trial here but the credibility of the legal system of Colombia. While everyone hopes that the Peace Agreement will be signed on 23 March the prospects for its successful implementation will be significantly undermined unless the government takes urgent action to address the complete lack of confidence in the legal system.

A first step would be the immediate release of David Ravelo Crespo.