Azimjan Askarov is a Kyrgyz HRD working against corruption and for civil and political rights in the country, including for the ethnic minority Uzbek population.  He was arrested during the violent clashes in southern Kyrgyzstan in 2010 between ethnic Uzbeks and Kyrgyz, though he had long been targeted by the authorities because of his human rights work.  Read more about his persecution on his case history page.  Masha Chichtchenkova is Front Line Defenders Protection Coordinator for Europe and Central Asia and is attending the opening of this new trial.

The trial in Chui regional court started this morning at 10 AM Bishkek time. I had difficulty gaining entrance to the court, as my name did not appear on the list.  Though it had been added at the last minute, the fact of the list was odd enough. The trial is public; the list was created in order "to facilitate smooth access for observers" whatever that is supposed to mean.

1. release, in accordance with decision of the UN Human Rights Council (HRC); and
2. a new proper investigation of the case.

Both were dismissed by the judge.

It should be noted, however, that on 27 September, Mr Farid Niazov, Head of Presidential Administration, listed the UN HRC decision on Azimjan's case as one of the reasons why President Atambayev decided to support a referendum on bringing changes to Constitution allegedly because of the "external threat to national independance".  Originally opposed to such a referendum, President Atambayev changed his mind "after the UN Committee decision on Askarov's case...He saw the real threat. Because an international institution asks to change decision of the Supreme Court."  So, the UN HRC decision is enough to get the President to reverse position on a referendum on the Constitution, but not enough to release Azimjan on the basis that his fundamental rights were violated. 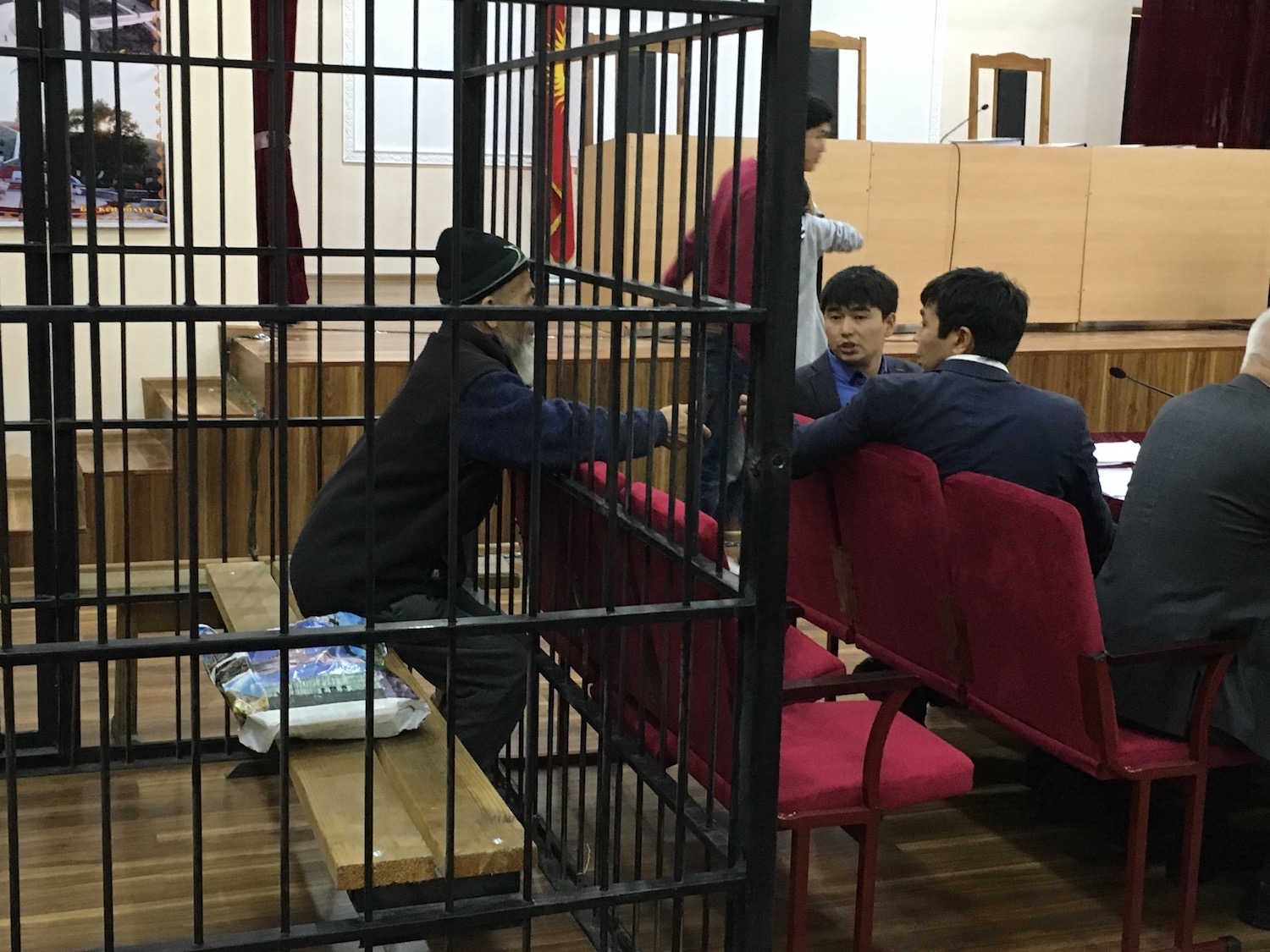 So this is a new trial on the case of mass riots and murder of policemen, which was pretty much what the first (discredited) trial was about. This new trial is based on the old criminal investigation, complete with multiple violations of the procedures, the absence of interogations of important witnesses, etc. Simply put, the only proof is the testimonies of the policeman's wife (who did not witness his killing) and of 7 injured policemen.

It is a little bit difficult to be optimistic about the result.

Unlike the previous hearing, this time Azimjan was brought to the court room. He looks like an old man and has difficulty walking.

His lawyer, Nurbek Toktakunov, has recently received a lot of threats on social media because of this case and he looks a bit exhausted.

This time it looks like a legitimate trial, so far I did not witness major violations (apart from "smooth access").  The policemen were questioned as witnesses and it is obvious that they are just repeating what they already said and what their colleagues are saying about Azimjan's presence on the bridge (where the alleged murder took place). Two of them cannot even confirm that they had seen Azimjan on the day in question.

At the end, Azimjan was escorted out.  He was quiet, shuffling back to his prison cell.