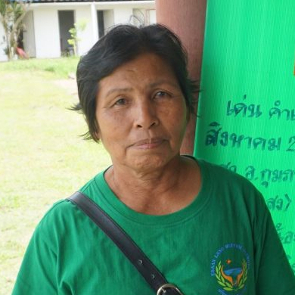 On 27 July 2017, a Thai Court in Chaiyaphum province found human rights defender Suphap Khamlae guilty of encroaching on forest reserves and sentenced her to six months’ imprisonment under the National Forest Reserve Act. She is the wife of land rights defender Den Khamlae, who was also sentenced in absentia and subject to an arrest warrant despite being missing since April 2016.

Suphap Khamlae is a land rights defender from the Khok Yao community in Kon San district, Chaiyaphum province, in Northeastern Thailand. Her community is currently facing forced eviction from the land they have occupied for decades, before it became a protected reserve. She has been advocating along with her husband Den Khamlae for the right to a legal title to the land for their community. Since 2015, Den Khamlae was leading the network of local villagers who have been trying to re-establish their right over this land. The prominent land rights defender is also a member of Essan Land Reform Network (ELRN), a union of local villagers opposing the Kon San Forest Project, which has caused significant destruction in parts of the Laohai forest area. The land was appropriated by the Forest Industry Organization which has evicted more than one-thousand people from local villages.

Den Khamlae disappeared on 16 April 2016 in Khok Yao forest near his village. Since then, his wife has been struggling to have the police properly investigate his disappearance and for the perpetrators of what she believes to be a murder, to be brought to justice.

On 27 July 2017, Suphap Khamlae was sentenced to six months in prison by the Phu Khiao Provincial Court after she was found guilty of trespassing on the Phu Sam Phaknam National Reserve forest under section 31 of the National Forest Reserve Act (1964). Suphap Khamlae is now detained in Chaiyaphum provincial prison. Her husband, Den Khamlae, was sentenced in absentia in the same case, as the Court estimates that the defender might still be alive. An arrest warrant was issued against him as well, despite the fact that a man’s skull believed to be his as well as some of his belongings were found in March 2017 in the forest where he went missing.

In July 2011, Suphap Khamlae and Den Khamlae were arrested along with a dozen other Khok Yao villagers for allegedly trespassing on protected forest land. After being sentenced to six months imprisonment by a first court and briefly detained, they were released on bail pending an appeal. In 2013, the Appeal Court upheld the earlier ruling. The defenders appealed again to the Supreme Court, whose verdict has been repeatedly delayed until 27 July because of the uncertainties surrounding Den Khamlae’s disappearance.

This sentence comes only a few days after the UN Committee on the Elimination of Discrimination against Women (CEDAW) expressed serious concern that women human rights defenders  in Thailand, particularly those advocating for land rights and the protection of the environment, have increasingly become targets of lawsuits, harassment, violence and intimidation by authorities and business enterprises due to their work.

I strongly condemn the conviction of human rights defender Suphap Khamlae, which I believe is solely motivated by her peaceful and legitimate work for human rights.

1. Immediately release Suphap Khamlae and quash her conviction as I believe that she has been targeted solely as a result of her legitimate human rights work;

2. Ensure that the investigation into the disappearance of Den Khamlae is thorough and impartial, with a view to bringing those responsible to justice in accordance with international standards, and inform his family of any new element pertaining to the investigation;