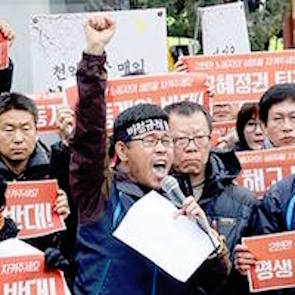 On 11 July 2016, the prosecutor in the case against human rights defender, Mr Sang-gyun Han, appealed the ruling of the Seoul Central District Court, seeking a more stringent punishment for  the role he played in various rallies and demonstrations in 2014-2015.

Sang-gyun Han is the leader of the Korean Confederation of Trade Unions (KCTU), the representative organisation of Korean workers and of the trade union movement, committed to advancing workers' empowerment through economic, social, and political reform, and the overall democratisation of the country. Sang-gyan Han was one of the organisers of thirteen different rallies and demonstrations that took place in 2014-2015.

On 4 July 2016, the Seoul Central District Court handed down a five-year prison sentence to Sang-gyun Han, finding him guilty of, among others, causing an injury to a public official (Article 144(2) of the Criminal Code), obstructing the discharge of duties by a public official (Article 144 of the Crimnial Code), the destruction of public goods (Article 141 of the Criminal Code) and obstructing traffic (Article 185 of the Criminal Code). During the court hearing, the prosecutor sought an eight-year prison sentence for the human rights defender, due to his leadership role within the trade union and the the wider labour movement in South Korea. On 8 July 2016, Sang-gyun Han appealed the ruling of the Seoul Central District Court , which sentenced him to five years' imprisonment term.

The arrest of Sang-gyun Han took place on 10 December 2015, at the Jogye Temple in Seoul, where he had spent a month in hiding. A month later, on 5 January 2016, official charges were brought against the human rights defender on eight different counts. The charges stemmed from the leadership role that Sang-gyun Han had played in the peaceful ‘People’s Rally’ on 14 November 2015 and the Sewol ferry protests in April and May 2015. The People’s Rally included members of KCTU, along with farmers and civic groups, who protested against the conservative government's push for a labour reform and against state-issued history textbooks. The Sewol ferry protests were organised to commemorate the first anniversary of the Sewol ferry sinking that killed more than 300 passengers. On both occasions tear gas and water cannons were used against demonstrators, resulting in dozens being injured. Following the protests led by KCTU, criminal procedures were launched against 585 of its members, 20 of whom were placed in custody and seven are currently awaiting verdicts.

In June 2016, the United Nations Special Rapporteur on Freedom of Peaceful Assembly and of Association, Mr Maina Kiai submitted a report to the UN Human Rights Council concerning in particular the case of Sang-gyun Han. The Special Rapporteur stated that “charging assembly participants with certain criminal offences, such as the general obstruction of traffic, de facto criminalises the right to peaceful assembly”.

I urge the authorities in South Korea to:

1. Immediately and unconditionally release Sang-gyun Han and quash his conviction as I believe that the criminal sentence handed down to Sang-gyun Han was solely motivated by his legitimate and peaceful work in defence of labour rights;

2. Stop the criminalisation and judicial harassment of labour rights defenders, including of the members of trade unions for actions undertaken as part of their peaceful and legitimate trade union activities;

3. Guarantee in all circumstances that all human rights defenders in South Korea are able to carry out their legitimate human rights activities without fear of reprisals and free of all restrictions.