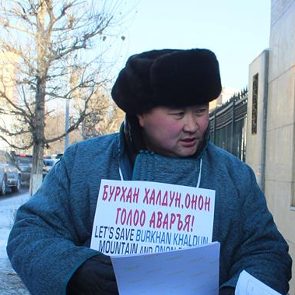 On 22 March 2016, the Criminal Court of Bayangol, Khan-Uul and Songinokhairkhan Districts rejected the complaint of human rights defender Mr Beejin Khastamur against the decision to detain him for interrogation at the Gants Khudag temporary detention center.

Beejin Khastamur is the founder of Delhiin Mongol Nogoon Negdel (DMNN), a non-governmental organisation which advocates for the protection of the environment and the rights of the nomad people of Mongolia. The organisation has exposed many violations of Mongolia’s environmental laws by foreign and domestic mining companies, in which certain Mongolian politicians have a stake. It has also organised numerous workshops, public gatherings and demonstrations to educate the public on environmental issues.

On 22 March 2016, the Criminal Court of Bayangol, Khan-Uul and Songinokhairkhan Districts denied a request from Beejin Khastamur's legal counsel to release the human rights defender from custody. He was arrested and detained for interrogation on 16 March 2016. During the hearing the counsel insisted that the interrogation of Beejin Khastamur could take place while he was at liberty and that there were no grounds to keep him in detention. Since being taken into custody, Beejin Khastamur has not been interrogated despite Mongolian law stating that he must be questioned at least once before his custody term ends. The human rights defender remains in detention at serious risk to his health due to high blood pressure and chronic kidney disease.

On the same date, four men dressed in black attempted to enter the house of Beejin Khastamur, saying they were officers from the Khan Uul district police. They banged on the door of the human rights defender's house, when his family were home, and informed Beejin Khastamur's wife that they wished to conduct a search of the house. No identifying documents were provided by the men, who left upon the human rights defender's wife saying that she would call the police.

On 16 March 2016, Beejin Khastamur was arrested in Ulan Bator on suspicion of committing a violent crime and placed in custody at the Gants Khudag temporary detention centre. The decision to detain the human rights defender was motivated by his alleged failure to report for questioning at the the Songinokhairkhan District Police Department following a car accident. However, the human rights defender did in fact present himself at the station on several occasions when called; however, the detective assigned to his case was not there at those times and was not reachable by phone.

On 10 March 2016, Beejin Khastamur was officially charged under Article 181.3 of the Criminal Code of Mongolia with “a crime committed using a weapon or by a violent criminal” despite there being no evidence proving his guilt. According to police from the Songinokhairkhan District Police Department, in the aftermath of a car accident which took place on 6 February 2016, Beejin Khastamur attacked the driver of another car using a knife. If convicted, the human rights defender faces up to 5 years of imprisonment.

The car accident occurred on 6 February 2016. Beejin Khastamur was driving on Peace Avenue in Ulan Bator when a car twice tried to pass him on the wrong side and eventually hit his vehicle. Its driver then got out of the car and attacked Beejin Khastamur, kicking him and hitting him on his head. Beejin Khastamur sustained bruises all over his body and suffered a brain concussion as a result of the incident. When police arrived at the scene, they did quickly concluded that the accident had been the fault of the second driver, then left. Immediately afterwards, the second driver called the police and claimed that he had been attacked and soon both he and Beejin Khastamur were picked up by the police officers and brought to the 1st precinct of the Songinokhairkhan District Police Department for questioning.

The second driver claimed that Beejin Khastamur beat him and stabbed him with a knife. Despite the requests of Beejin Khastamur to search him, his car and the place of the accident for a weapon, the police officers took no action at the time nor on several other occasion when Beejin Khastamur reported for additional questioning.

On 21-23 December 2015, Beejin Khastamur organised a sit-in protest against an allegedly illegal permit given to a joint Canadian and Mongolian company enabling it to mine gold on Onon River. Since then he has faced constant acts of intimidation and harassment. On several occasions people have banged on his door at night, cut his electricity, slashed his car tires and threatened his wife and children. He has also received death threats by phone.

I am concerned of the detention of Beejin Khastamur and the attack and charges against him, which I believe may be linked to his legitimate and peaceful activities in the defence of environmental rights and rights of nomad people in Mongolia.

I urge the authorities in Mongolia to:

1. Immediately and unconditionally release Beejin Khastamur and drop all charges against him, as I believe that he has been targeted solely as a result of his legitimate and peaceful work in the defence of human rights;

2. Carry out an immediate, thorough and impartial investigation into the attack on Beejin Khastamur, with a view to publishing the results and bringing those responsible to justice in accordance with international standards;

4. Guarantee in all circumstances that all human rights defenders in Mongolia are able to carry out their legitimate human rights activities without fear of reprisals and free of all restrictions.