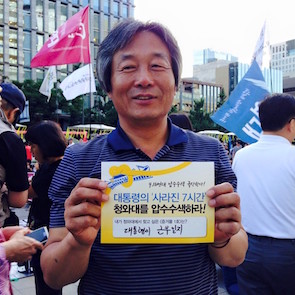 On 22 January 2016, the Seoul District Court indicted human rights defenders Ms. Hye-jin Kim and Mr. Lae-goon Park, in relation to their participation to a series of protests in solidarity with the Sewol ferry tragedy victims.

South Korean police arrested and detained Lae-goon Park on 17 July 2015. The prosecutor's office had requested a detention warrant also for Ms Hye-jin Kim, but the Court issued a detention order only for Mr Park. Both human rights defenders were taking part in protests in relation to the Sewol ferry disaster.

The Sewol ferry sunk on 16 April 2014, killing more than 300 people. Following the incident, victims' families, civil society organisations and human rights defenders called the government to establish an independent and transparent investigatory committee, to look into the lack of effectiveness of the rescue operation and the false reports regarding the incident.

In November 2014 the government adopted the Special Law for Seeking Truth of the Sewol Ferry Disaster and Establishing Safer Society (Sewol Special Law), as requested by the victims' families and civil society organisations. However, in March 2015 the Ministry of Ocean and Fisheries announced an enforcement ordinance that negates the enforcement of the Sewol Special Law. This sparked a series of protests and since April 2015 South Korean authorities have detained seven human rights defenders for their participation in demonstrations related to the Sewol Ferry disaster.

On 17 July 2015, human rights defender Mr. Lae-goon Park was arrested and detained by South Korean police due to his participation in a series of protests related to the Sewol ferry tragedy. Since April 2015 South Korean authorities have detained seven human rights defenders for their participation in protests related to this incident.

The police argue that the human rights defender incited sedition during the protest and instructed other protesters to take violent actions against police officers. After his arrest the police searched his house, office and car, however, the prosecutor's office has yet to present any evidence against him.

His colleagues from the Coalition 4.16, Hyung-jae Ham and Hyun-sik Kim, were detained on 30 April. According to the prosecutor's office indictment they face charges under Article 185 of the Criminal Code of South Korea (General Obstruction of Traffic) and risk up to 3 years imprisonment. The court proceedings on both cases will take place on 6 August 2015.

Since April 2015 there have been a series of protests in Seoul in solidarity with families of the Sewol ferry tragedy victims. The Sewol ferry sunk on 16 April 2014 killing more than 300 people. The recent protests were sparked by an enforcement ordinance issued by the Ministry of Ocean and Fisheries of South Korea. This ordinance negates the enforcement of the Sewol Special Law for Seeking Truth of the Sewol Ferry Disaster and Establishing Safer Society. The Sewol Special Law was adopted on 7 November 2014, in order to set up an independent investigatory commission to carry out an independent and transparent investigation into the Sewol ferry tragedy, as requested by the victims' families and civil society organizations.