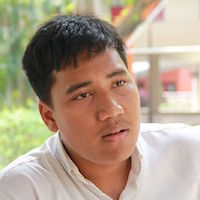 The student human rights defenders were accused of having held a political gathering of more than five persons on 7 December 2015, without official authorization. They were arrested on 20 and 21 January 2016, and released on 21 and 22 January 2016. They now await the decision of the military prosecutor on whether to indict them. Sirawit Serithiwat was subjected to ill-treatment while in detention.

Sirawit Seritiwat is a student human rights defender from Thammasat University and a pro-democracy activist involved in the New Democracy Movement. His fellow student human rights defenders Chonthicha Jaeung-Rew, Chanoknan Ruamsap, Abhisit Sapnaphapan and Korakot Saengyenpan are also active members of the movement, which was formed in June 2015 with the aim of using peaceful means to fight for the establishment of democracy in Thailand.

The Military Court of Bangkok released the human rights defenders on 21 and 22 January 2016, after rejecting police requests to remand them in custody, while awaiting the decision of the military prosecutor to indict them on charges of violating the national ban on political assembly. If indicted, they will face trial before a military court, and could face up to six months' imprisonment and a fine of up to 10,000 Baht (approximately €250).

Sirawit Serithiwat was the first of the five individuals to be detained. On 20 January 2016, eight military officers arrested him at the Rangsit Campus of Thammasat University in Bangkok. They then blindfolded him, forced him into a pick-up truck and took him to an unknown location, where they subjected him to ill-treatment including repeated hits to his head and back, as well as verbal abuse. Serithiwat was subsequently taken to Nimit Mai Police Station, then transferred to Thonburi Police Station.

The charges against Sirawit Serithiwat, Chonthicha Jaeung-Rew, Chanoknan Ruamsap, Korakot Saengyenpan and Abhisit Sapnaphapan follow arrest warrants, that the Bangkok Military Court issued against them on 13 January 2016. All five are facing charges of violating Order No. 3/2015 of the National Council for Peace and Order, which imposes a ban on the holding of political gatherings of five persons or more without prior official authorization.

The accusations related to their attempts to participate in a peaceful demonstration on 7 December 2015, to demand the opening of an investigation into alleged corruption in the construction of Rajabhakti Park by the Thai military.

The police stopped the human rights defenders at Baan Pong train station, while they were on their way to the park, and arrested them along with 20 other activists. All those arrested were subsequently released, after a large number agreed to sign pledges vowing they would not join any political movement in the future, and that they would not leave the country without the authorities' prior permission. Sirawit Serithiwat, Chonthicha Jaeung-Rew, Chanoknan Ruamsap, Korakot Saengyenpan and Abhisit Sapnaphapan refused to sign the pledges.

along with more than twenty activists from the Resistant Citizen group were detained by military officers and police at Ban Pong Train Station.

The arrests occured in Ratchaburi Province while the activists were travelling to Rajabhakti Park to carry out a demonstration against alleged military corruption.

The excursion was organised by Resistant Citizen and several well-known pro-democracy activists, including lawyer Anon Numpa to investigate the corruption scandal surrounding Rajabhakti Park which was constructed by the Thai military. The military has denied any financial wrongdoing over the construction of the park, which is currently under investigation over alleged improper payments.

On 7 December at approximately 10 am, the authorities detached the train compartment en-route to Rajabhakti Park and forcibly removed some of the activists from the carriage before taking them into custody for questioning. Later that evening all the activists were released. General Prayut Chan-o-cha, the junta leader and Prime Minister, told media that the authorities only barred the activists in order to prevent conflict and confrontation with other political groups. He then continued to say that he cannot guarantee safety for anyone who is demanding a probe into the Rajabhakti Park corruption scandal.

On 5 December 2015 Thai military officers had contacted Sirawit Serithiwat and told him that they would come to pick him up from Thammasat University, Rangsit Campus, and bring him to a military base for a discussion. The student leader declined the request and turned his communication devices off. Being unable to contact him, the military officers went to the home of his mother instead, and asked her to convince her son to call off the event planned for 7 December. They even threatened her that the family could not blame them for any ‘consequences’. At approximately 7.30 am on 6 December, his mother was contacted by the military officers again, and was asked to meet with them in a military barracks that afternoon. She denied this request.

This case is the latest evidence that the country’s military government is using arbitrary powers of detention to silence peaceful activism.