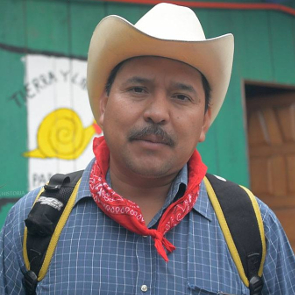 On the night of 24 February 2016, the son of human rights defender Mr Mario Luna Romero was confronted by a group of unknown individuals in the State of Sonora, questioned about his father and thrown from his motorcycle.

Mario Luna Romero is an indigenous rights defender and Secretary of the traditional authorities of the Vicam town of the Yaqui tribe in Sonora. The human rights defender is one of the main spokespersons for the Yaqui tribe, defending their rights in the context of the construction and operation of the Independence Aqueduct mega-project. The community has been working to prevent the diversion of water from the Yaqui river, over which the tribe has 50% ownership, to the Independence Aqueduct.

The attack occurred at approximately 7:30 pm on 24 February 2016, as the son of Mario Luna Romero was travelling by motorcycle in the State of Sonora. A group of unidentified individuals driving in a pick-up truck approached the son of the human rights defender and questioned him about his father and other members of the Yaqui tribe, pulling at his clothes and throwing him off his motorcycle to the ground.

Mario Luna Romero has previously been targeted for his work defending the rights of the Yaqui tribe in Sonora. On 23 September 2015, he was released from the Centre for Social Readaptation Number 2 in Hermosillo, Sonora, after having spent over a year in detention on a trumped-up conviction of kidnapping and theft. He was arrested on 11 September 2014, on the basis of an arrest warrant issued by the Third Tribunal of the Criminal First Instance Court of Hermosilloes on 14 June 2013. The accusations against him arose following peaceful protests by the Yaqui tribe to call for compliance with a decision of the Supreme Court, which found a violation of the tribe's right of consultation in the granting of the Environmental Impact Authorisation for the Independence Aqueduct, and ordered that a consultation be held.

I urge the authorities in Mexico to:

2. Carry out an immediate, thorough and impartial investigation into the attack on the son of Mario Luna Romero, with a view to publishing the results and bringing those responsible to justice in accordance with international standards;

3. Guarantee in all circumstances that all human rights defenders in Mexico are able to carry out their legitimate human rights activities without fear of reprisals and free of all restrictions.