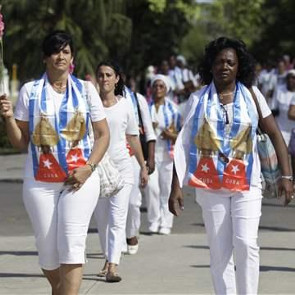 Front Line Defenders has received worrying reports that between 17 and 22 March 2016, prior to the arrival of the President of the United States in Cuba and during his stay for an official visit, a crackdown was carried out against human rights defenders in the country. Several human rights defenders were arrested and temporarily detained, while others were placed under surveillance in a clear attempt to prevent them from organising demonstrations during the official visit. The human rights defenders targeted included members of human rights organisations such as Damas de Blanco Laura Pollán (Ladies in White), Consejo de Relatores de Derechos Humanos de Cuba - CRDHC (Cuban Council of Human Rights Rapporteurs) and Foro por los Derechos y las Libertades en la Habana – ForoDyL (Forum for Rights and Freedoms in Havana).

In the evening of 22 March 2016, Baptist pastor and defender of religious freedoms, Reverend Mario Feliz Lleonart Barrroso, was released after being arrested on 20 March 2016, just a few hours before President Obama's arrival in Cuba. Prior to his arrest, he reported that his home and church were being kept under surveillance by police and state security agents.

On 21 March 2016, human rights defenders Mr Antonio Rodiles and Ms Ailer Maria González from the Foro por los Derechos y las Libertades en la Habana were violently arrested by state security officers as they left their house in Habana. Both were hit by the arresting officers and forcefully pushed into the police car, whilst Ailer Maria González was struck on the eye and had her hair pulled during the arrest. The state security officers failed to provide Antonio Rodiles and Ailer Maria González with a reason for their arrest. They were released later on the same day. Foro por los Derechos y las Libertades en la Habana was created in December 2015, uniting several human rights defenders, journalists and other activists to advocate for the development of a new legal framework respecting human rights and providing for amnesty for political prisoners in Cuba.

Damas de Blanco Laura Pollán were targeted most fiercely in the crackdown. Dozens of its members were arrested and temporarily detained during their regular Sunday march on 20 March 2016, before being released later on the same day. Those detained included the groups leader, human rights defender Ms Berta Soler. Damas de Blanco was founded in 2003 by wives and female relatives of imprisoned dissidents in Cuba. Each Sunday, members of the group walk through the streets in white clothing silently, on their way to attend mass, in protest against the continued imprisonment of political prisoners.

Human rights defender Mr Juan Carlos Gonzales Leiva, from the CRDHC, was kept under surveillance for over 24 hours, beginning on 17 March 2016. His house was reportedly surrounded by state security officers and members of the national police in patrol cars. A search of his house was conducted by the national police, during which his land-line was cut and two radios were seized from the house. CRDHC is an organisation that works to denounce and publicise human rights violations in Cuba, and calls for the release of political prisoners in Cuba and the improvement in prison condition in the country.

The visit of President Obama to Cuba took place in the context of ongoing abuses and human rights violations perpetrated by the Cuban government in an attempt to silence human rights defenders speaking out against the regime and calling for the release of political prisoners. On 22 March 2016, President Obama met with several Cuban human rights defenders, activists and dissidents to discuss the human rights situation in Cuba in a meeting that lasted almost two hours. Amongst those present at the meeting was the leader of Damas de Blanco, Berta Soler.

I am gravely concerned at the arbitrary arrests and detentions of the human rights defenders, which I believe were intended to silence all dissenting voices in the country while Cuba was held under spotlight of the international media during President Obama's visit.

I urge the authorities in Cuba to:

1. Immediately cease all further harassment of human rights defenders who work to ensure the protection and promotion of human rights in Cuba, as I believe that the arrests carried out were solely related to the legitimate and peaceful activism of those detained;

2. Carry out an immediate, thorough and impartial investigation into the acts of repression against members of Ladies in White, the Cuban Council of Human Rights Rapporteurs,   Forum for Rights and Freedoms in Havana and all the above-mentioned human rights defenders during Obama's visit, clearly considering their human rights work as a motive for the repression, and with a view to publishing the results and bringing those responsible to justice in accordance with international standards;

3. Take all necessary measures, in consultation with the above-mentioned organisations and human rights defenders, to guarantee their physical and psychological integrity and security and that of their members;

4. Guarantee in all circumstances that all human rights defenders in Cuba are able to carry out their legitimate human rights activities without fear of reprisals and free of all restrictions.