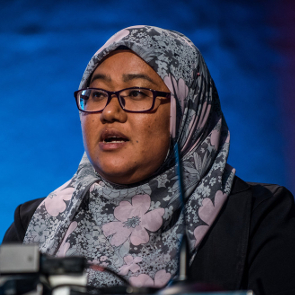 On 19 February 2016, a group of ten men claiming to be border police officers came to the house of human rights defender Ms Anchana Heemmina in the Songkhla province of southern Thailand and questioned and photographed the human rights defender's mother without presenting a warrant.

Anchana Heemmina is a human rights defender and the founder of the Duay Jai Group, an organisation that provides rehabilitation services for torture victims in Thailand and support for their families. Recently, Anchana Heemmina contributed to the compiling of a report on torture of members of the Muslim Malay minority who had been arrested for alleged involvement with the Deep South insurgent groups in Thailand. In November 2015, she attended the 8th Front Line Defenders Dublin Platform.

On 19 February 2016, a group of ten unidentified men in green uniform came to the house of Anchana Heemmina. The mother of the human rights defender, a 75-year-old-woman, was at home alone at the time. Without presenting an official warrant, the men began to question the mother of Anchana Heemmina about the work of her daughter and her personal life. They then proceeded to take pictures of the human rights defender's mother and the house. Before leaving, the men told the lady to warn Anchana Heemmina not to use social media platforms, such as Line chat or Facebook, for communication.

On 14 February 2016, Anchana Heemmina and other authors of the report on torture of members of the Muslim Malay minority were contacted by Col. Suratep, Head of the Civil Society Organisations unit under the Internal Security Operations Command ('ISOC'), a unit of the Thai military devoted to national security issues, and asked to appear for a discussion. The human rights defender subsequently presented herself at Sirinthon army Camp in Yala Province for the discussion. A two and a half hour long meeting proceeded, during which seven security officers questioned Anchana Heemmina about the cases of torture reported in her recent publication. The officers expressed their discontent with the report and requested the human rights defender to henceforth submit all of her publications to the ISOC prior to their release. Anchana Heemmina refused to do so.

On 19 January 2016, three unidentified men in green uniform came to the clothing shop in Saba Yoi District market in Songkhla province, owned by Anchana Heemmina, looking for the human rights defender, but she was not there.

On 10 January 2016, the report on the torture of Muslim Malay minority members prepared jointly by the Duay Jai Group and the Cross Cultural Foundation was sent to Lt. Gen. Wiwat Pathompak, Commander of the 4th Army, the section of the Thai Army responsible for southern Thailand, whose representatives subsequently officially denounced the publication, calling it a work of fiction aimed at discrediting the Thai Army.

Under the Emergency Decree and Internal Security Act, authorities in the Songkhla province are entrusted with ample powers. In particular, they have the right to detain a person without formal charges for a period of up to 37 days. Special security laws have been in force in the region for more than a decade, but during the last two years the situation has significantly deteriorated, with a large number of cases of torture alleged to have been perpetrated by Thai security and military forces.

I condemn the harassment of human rights defender Anchana Heemmina, which I believe to be directly linked to her peaceful and legitimate work in defence of the rights of torture victims in Songkhla province.

1. Immediately cease all harassment of Anchana Heemmina and of her family, as Front Line Defenders believes that it is directly linked to her legitimate and peaceful work in defence of human rights in Thailand;