Statement in Solidarity with Patricia Gualinga and Indigenous Earth Defenders

Front Line Defenders has signed onto the following letter in solidarity with human rights defender Patricia Gualinga and other Indigenous rights defenders to authorities in Ecuador.

We, the undersigned individuals and organizations, are supporters and allies of Patricia Gualinga, her community of Sarayaku, and the broader Ecuadorian Amazonian indigenous movement. We have worked with Patricia for decades and are extremely concerned by the attack on her house and the death threats she received on the night of January 5th, 2018. Since then we have been monitoring the response and investigation by local and federal authorities and are dismayed by the results.

We are concerned that the local police were extremely slow to respond and that the investigation has not appeared to yield concrete results. Beyond measures to protect Patricia from further attacks, we believe the most effective protection would be to identify the perpetrators and to hold them accountable for their actions, attacking the impunity of these threats at the source.

We want to make clear that our concern is not only for Patricia Gualinga but also for the numerous other indigenous women and men who have also suffered threats, attacks, criminalization, and murder. We support the #AmnistiaPrimero movement to end criminalization of indigenous leaders for their peaceful activism.

Regarding Patricia Gualinga’s case, we join our voices in: 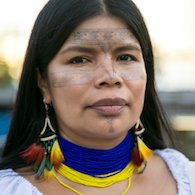