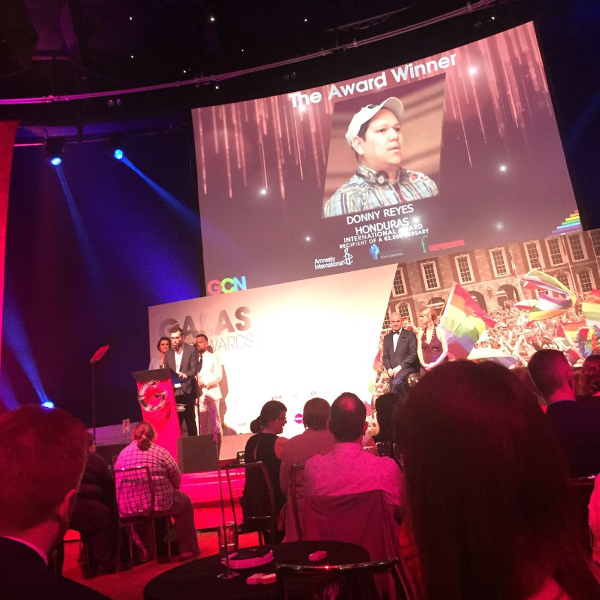 On 27 February 2016, the annual GALAS awards took place at a special event in Dublin's Mansion House at which the Irish gay community honoured lesbians, gay men, bisexuals and transgender people and organisations for their contribution to Irish society. As part of the GALAS, the International Activist of the Year Award, supported by Amnesty Ireland, Front Line Defenders, the Irish Council of Civil Liberties (ICCL), Gay Community News (GCN) and the National LGBT Federation (NXF) was presented to Honduran human rights defender Donny Reyes.

The International Activist of the Year Award is dedicated to activists and human rights defenders who fight for LGBTI rights in countries that seriously discriminate against lesbians, gay, bisexuals and transgender people.

Donny Reyes is the technical director of Asociación Arcoiris, an organisation established in 2003 that provides support to LGBTI persons victims of violence, works on awareness initiatives, promotes HIV prevention programmes and lobbies the Honduran government to advance LGBTI rights in the country.

LGBTI defenders in Honduras are doubly discriminated against: both their sexuality and their defence of human rights puts them at risk of attack. The members of the association have received numerous threats because of their work and they are constantly harassed, intimidated and attacked. In the past six months, Arcoiris has reported 36 security incidents and six of its members have been killed.

“This award is not only about me, I am receiving it in the name of my organisation and in the name of a community that historically has been marginalised, discriminated against and subjected to violence,” said Donny in his acceptance speech, delivered via video message as he could not attend the ceremony.

This is a particularly difficult moment for Donny: his good friend and fellow human rights defender Paola Barraza was killed on January 26, after surviving an assassination attempt last year.

“Donny is an extraordinary man who leads the fight for LGBT rights in Honduras. It is not a fight for equality: it is a fight for existence,” said Andrea Rocca, Head of Protection at Front Line Defenders, who collected the prize on his behalf.

Donny himself has suffered attacks, intimidation, threats, beatings by the police and other abuses. He was forced to leave Honduras and go into hiding a number of times. Despite the extremely high levels of violence, however, he has always gone back to his country and to continue the fight for the rights of the LGBTI community.

“This award is an important sign of solidarity, and is a way of telling Donny and his colleagues that they are not alone: the global LGBTI movement is behind them,” said Andrea Rocca at the GALAS ceremony.