About Tep Vanny
Status:
Attacked
About the situation

During a peaceful protest on 18 October 2013, in Phnom Penh, human rights defender, Ms Tep Vanny, was assaulted by security forces from Khan Daun Penh while they attempted to confiscate demonstrators' possessions. Three other demonstrators and a foreign journalist were also left with minor injuries. 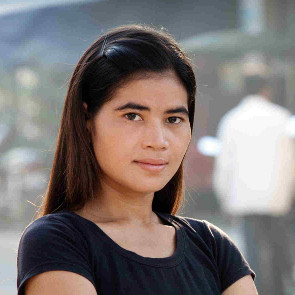 Tep Vanny is a land rights activist and human rights defender combating corruption in Cambodia. She played a prominent role in mobilising Boeung Kak Lake communities against government and private corporations' development plans and the evictions of community residents, for which she was eventually sentenced in 2012. She was honoured with the 2013 Vital Voices Global Leadership Award for Leadership in Public Life in recognition of her land rights advocacy.

During a peaceful protest on 18 October 2013, in Phnom Penh, human rights defender, Ms Tep Vanny, was assaulted by security forces from Khan Daun Penh while they attempted to confiscate demonstrators' possessions. Three other demonstrators and a foreign journalist were also left with minor injuries.

At 7:30am on 18 October 2013, a large group consisting mostly of young people and monks gathered at Wat Phnom pagoda, in Phnom Penh, to perform a traditional ceremony and pray for Mr Mao Sok Chan, who was shot dead by security forces at Kbal Thnal bridge in Phnom Penh on the night of 15 September 2013. The organisers of the protest had originally planned to march to the First Instance Court to submit a petition calling for an investigation into the death of Mao Sok Chan. The petition also called for increased independence of television stations, the removal of censorship and that media outlets be allowed to report freely on events occurring in Cambodian society.

The protest at Wat Phnom on Friday morning was peaceful until security forces from Khan Daun Penh (Daun Penh District) refused to allow the participants to perform the traditional ceremony for Mao Sok Chan. The security forces attempted to confiscate protestors' materials and tried to seize the cameras of journalists and observers who were monitoring the event. The resulting disturbance left five people with minor injuries. Tep Vanny was punched on the forehead while trying to protect a man who was being beaten by security forces. Three protesters were also assaulted: Ung Sothea was punched in the mouth, Heng Samnang received a kick to his left thigh, and Koa Narong was punched in the chest. They did not go to the hospital as there was a non-governmental first aid group at the scene.

Under Cambodia’s Law on Peaceful Assembly (the “Demonstration Law”), organisers of such events must submit a letter of notification to the Phnom Penh Municipal Hall. Although the organisers of the Wat Phnom protest did submit a letter of notification on 11 October 2013, the Municipal Hall rejected it “due to an administrative error”. The letter was submitted again on 16 October 2013, but as a result of late submission, the permission for the protest was not granted. The rejection of letters of notifications relating to public demonstrations by the Phnom Penh Municipality has become a regular occurrence.

Front Line Defenders expresses concern at the assault of human rights defender Tep Vanny at the hands of security forces of Khan Daun Penh, and at the restrictions imposed on the right to peaceful assembly.