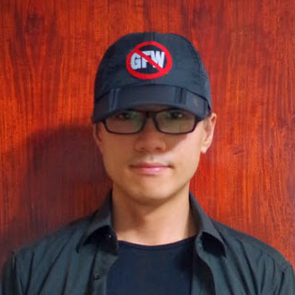 Zhen Jianghua, also known as Guests Zhen is a human rights defender and Executive Editor of ATGFW.ORG, an online portal which promotes access to information by educating people about Internet censorship in China and how to gain access to censored websites by breaking through the Great Firewall of China. He is also a technical consultant with Human Rights Campaign in China, an advising expert with Chinese Wikipedia, and a project officer of a HIV/AIDS prevention education project in Zhuhai, run by the Hong Kong AIDS Foundation.

On 3 September 2016, the human rights defender travelled to Wukan village, Guangdong Lufeng county. He met with local villagers who began protesting on 19 June against illegal land grabbing by the Government, and calling for the release of a local leader, Lin Zuluan, who has been detained since 17 June. After several hours of discussions with villagers, as Zhen Jianghua was about to leave Wukan, he was stopped by persons from the State Security and taken to Lufeng City Public Security Bureau. The human rights defender was detained and questioned for over 24 hours on suspicion of inciting a protest in Wukan village, and was not permitted to contact his family during this time.

On 4 September 2016 at approximately 4:00p.m., the human rights defender was taken to Chaoyang police station for further interrogation until 10:00p.m, when his mobile phone, computer and camera were forcibly taken from him. Later, he was transferred to a hotel where he was kept under guard.

On 7 September 2016, Zhen Jianghua was released from detention in the hotel and went to Chaoyang police station to collect his confiscated items. Upon collection, he noticed that several programmes had been installed on his computer, which would give the police access to his computer, allowing them to delete files, read encrypted documents, and install malware. Zhen Jianghua later published an online public statement about his detention, and at approximately 7:00p.m., more than 10 state security officers arrived at his home and took him back to Chaoyang police station. Zhen Jianghua was detained until the following day for interrogation on suspicion of “inciting participation in illegal rallies, marches and demonstrations”.

On 8 September, Zhen Jianghua was released from police custody.

Front Line Defenders is concerned about the police harassment against Zhen Jianghua and believes it is connected to his work promoting and protecting human rights in China, particularly on educating the Chinese citizens about Internet censorship.

1. Immediately cease all further police harassment of Zhen Jianghua, as Front Line Defenders believes it is solely as a result of his legitimate work in defence of human rights;