About Margoth Escobar
Status:
Home attacked by arson
About the Situation

On 29 September 2018, an arson attack was carried out at the home of woman human rights defender Margoth Escobar in Puyo, Ecuador. On 2 October 2018, the defender filled a formal complaint before the Prosecutor’s office. 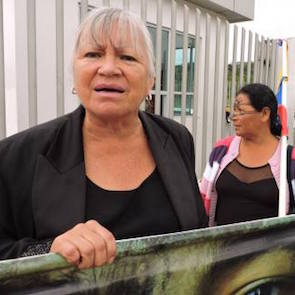 Margoth Escobar is a well-known environmental and indigenous rights defender who has worked since the 1970s in the promotion of the rights of indigenous peoples from the Amazon region. She participated in the establishment of the Unión Provincial de Organizaciones Campesinas de Manabí (Provincial Union of Peasant Organizations of Manabi) in 1975, an organisation which has played a major role in the recovery of the lands of several rural families in the Manabí province. Margoth is also a member of the Colectivo de Mujeres Amazonicas (Collective of Amazonian Women). The collective fights to end the negative impacts of mining and oil extractivism in the Achuar, Shuar, Waorani, Sapara and Shiwiar peoples territories, among others. As part of the work, in March 2018 women defenders part of the Colectivo de Mujeres Amazonicas met with President Lenin Moreno to demand respect for the communities’ right to a free, prior and informed consent before the implementation of any extractive project in their territory, as well as to demand protection and self-determination for the indigenous populations and indigenous leaders of the Amazon.

On 29 September 2018, an arson attack was carried out at the home of woman human rights defender Margoth Escobar in Puyo, Ecuador. On 2 October 2018, the defender filled a formal complaint before the Prosecutor’s office.

The fire at the residence of Margoth Escobar started on the night of 29 September, when she was not at home. The defender first thought the cause had been an electrical dead short, but the preliminary information made available by the Fire Department indicated that the house was intentionally set on fire. On 2 October 2018, Margoth filled a formal complaint before the Prosecutor’s office.

It is not the first time Margoth Escobar is targeted. In August 2015 she was arrested and investigated for alleged aggression and resistance in the context of the intense social protests that took place that year - including a general workers and indigenous peoples' strike in August. The burning of her home also represents an attack on the main meeting place for the Colectivo de Mujeres Amazonicas, and the latest in a series of threats and attempts the women organised in the Collective have been subjected to. Earlier this year, Patricia Gualinga, Nema Grefa, Salome Aranda, all members of Colectivo de Mujeres Amazonicas, have been also targeted due to their work in defense of the indigenous peoples of the Amazon.

Front Line Defenders strongly condemns the arson attack on the home of Margoth Escobar, the most recent in a serious of attacks and intimidatory acts perpetrated against woman human rights defenders and indigenous leaders in Ecuador. Front Line Defenders believes these attacks to be directly linked to the legitimate and peaceful work they do in the defence of indigenous communities in the Amazon.

Front Line Defenders urges the authorities in Ecuador to:

1. Carry out an immediate, thorough and impartial investigation into the arson attack at the home of woman human rights defender Margoth Escobar, with a view to publishing the results and bringing those responsible to justice in accordance with international standards;

2. Take all necessary measures to guarantee the physical and psychological integrity and security of Margoth Escobar, in coordination and agreement with her;