About Ashraf Abu Rahma
Status:
Sentenced
About the situation

On Tuesday 21 November 2017, Ashraf Abu Rahma was sentenced by Ofer Military Court to three months in prison, a 5000 NIS fine, and an 18-month suspended sentence. 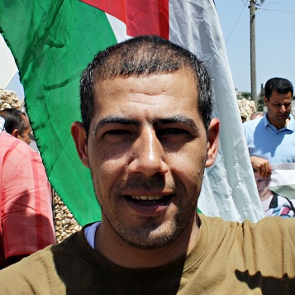 Ashraf Abu Rahma (also known as Ad-Daba’a) is a Palestinian human rights defender and peaceful protester against the Israeli wall in Bi’lin, which cuts off Palestinian farmers from access to their land and which has been condemned as illegal by the International Court of Justice. The human rights defender has been a persistent actor in the peaceful mobilization against illegal settlement expansion in Bil’in alongside other international, Palestinian, and Israeli activists.

On 14 November 2017, the detention of Ashraf Abu Rahma was extended by another seven days pending further interrogation on purported suspicions of throwing stones. He is currently being held in Ofer prison. The human rights defender was arrested on 27 October 2017 while accompanying a group of French activists on a village tour along with approximately 15 Bil’in locals. The arrest took place several hours after the weekly peaceful protest in Bil’in.

The human rights defender has faced persistent harassment by Israeli military and intelligence. In March 2017, Ashraf Abu Rahma and his wife Rana Abu Rahma were held at the Israeli border for eight hours where intelligence officers issued threats concerning his continued role in protests. In reference to the human rights defender’s participation, Rana Abu Rahma was told, “if you don’t put your husband away, we will”. In October 2016, their home was raided at 3:00 am by Israeli military, who took laptops and phones from the house. He was also arrested in 2010 and 2012, associated with his participation in village protests. The human rights defender was previously shot at close range while blindfolded and handcuffed with zip ties in 2008 near Ni’lin checkpoint, drawing international attention. He continues to suffer from muscle spasms as a result of the injury he sustained in 2008.

Ashraf Abu Rahma was featured in 5 Broken Cameras, a film which documented his peaceful resistance to settler expansion in Bil’in. The family of the human rights defender has been subjected to excessive violence by the Israeli military during peaceful protests, which resulted in the deaths of his sister Jawaher Abu Rahma, who died of cardiac arrest after inhalation of high levels of tear gas on 31 December 2010, and his brother Bassem Abu Rahma, who was killed by a high-velocity tear gas canister fired at his chest on 17 April 2009.

Since 2005, Israeli forces have been bulldozing olive trees in Bil’in to facilitate construction of the Israeli wall near the illegal settlement Modi’in Illit. According to local farmers and activists, the Israeli wall cuts off an estimated 60% of Bil’in’s farmland. The protest movement in Bil’in began in 2005 when villagers learned of construction plans for the wall which would cut through agricultural land and has since been joined by both international and Israeli activists. The village of Bi’lin has also frequently been the subject of arson attacks on olive trees by settlers, military raids, and the use of rubber bullets and tear gas during peaceful protests.

1. Immediately and unconditionally release Ashraf Abu Rahma and drop the investigation against him, as Front Line Defenders believes that he is being held solely as a result of his legitimate and peaceful work in the defence of human rights;

2. Immediately cease all further harassment of Ashraf Abu Rahma and his family, which Front Line Defenders believes is in retaliation to his legitimate work in defence of human rights;

3. Carry out an immediate, thorough and impartial investigation into arrest and threats against Ashraf Abu Rahma, with a view to publishing the results and bringing those responsible to justice in accordance with international standards;

4. Provide the necessary medical treatment for the human rights defender for injuries which he has sustained from previous arrests and harassment;

5. Cease targeting all human rights defenders in the OPT and guarantee in all circumstances that they are able to carry out their legitimate human rights activities without fear of reprisals and free of all restrictions including judicial harassment.