About Sandra Kodouda
Status:
Disappeared & Assaulted
About the situation

Human rights defender Sandra Kodouda returned home with injuries on 16 April 2015, three days after a group of unidentified men forcibly abducted her from her car in Omdurman, Khartoum. Initial reports indicate that she suffered a dislocated shoulder and shows signs of physical abuse. 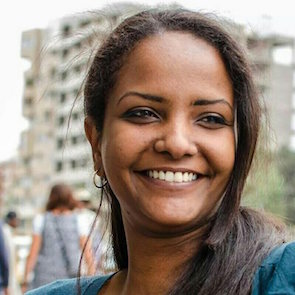 Sandra Kodouda is a prominent human rights defender in Sudan. She is active in campaigns fighting for women's rights, freedom of expression and association, and environmental rights. She is also a member of the Youth Committee against the Building of Dal and Kajabar Dams, and peacefully partook in country-wide anti-austerity demonstrations in September and October 2013.

Human rights defender Sandra Kodouda returned home with injuries on 16 April 2015, three days after a group of unidentified men forcibly abducted her from her car in Omdurman, Khartoum. Initial reports indicate that she suffered a dislocated shoulder and shows signs of physical abuse.On 12 April 2015, the day of her kidnapping, Kodouda was in her car speaking to a friend on the phone at around 5 pm. The friend with whom she was speaking overhead Kodouda's kidnappers refuse to show their identification when Kodouda requested it, and then instructed her to switch off her phone.

Shortly after Kodouda's kidnapping, family members found her abandoned car in front of the Almourada school, with the keys still in the ignition. Her family filed a criminal case at the Omdurman Central Police Station alleging the kidnapping of Kodouda, and completed a form at National Intelligence and Security Service (NISS) offices. Authorities there informed Kodouda's family that there was no record of her detention at that time.

On 16 April 2015, she returned home. Initial reports indicate that she suffers from a dislocated shoulder and "other injuries."

While it remains unclear if the NISS is responsible for Kodouda's kidnapping and three day disappearance, Sudanese authorities have targeted the human rights defender for her activism in the past. The NISS detained Kodouda in July 2012 after she mobilised support for the release of youth activist Rudwan Daoud - also detained by the NISS in the same month on the basis of participating in peaceful political protests.

The NISS detained Kodouda again in August 2014 because of her participation in the "No to Women's Oppression" collective, an initiative which raises awareness of oppression against women, and protects women's rights through peaceful protest and reporting.