About Konstantin Reutski
Status:
Assaulted
About the situation 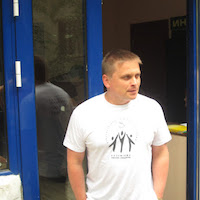 Konstantin Reutski is chairman of the Human Rights Centre "Postup" (Path), and a journalist with online media outlet informator.lg.ua and with Gromadske TV. He routinely covers events in the area concerned by Ukraine's anti-terrorist operation (ATO) and documents human rights violations in the region.

On 29 January 2015, human rights defender Mr Konstantin Reutski was beaten by road police officers at the check point Pisochin in the Kharkiv region.

The police officers refused to identify themselves, and Konstantin Reutski demanded that they respect applicable legal procedures. As a verbal confrontation ensued, the human rights defender started to film the search. The officers reportedly grabbed his camera and hit Konstantin Reutski repeatedly. They confiscated the camera, which contained materials from Debaltsevo, Popasnaya and Mariupol, where fighting has taken place in recent days. The journalists accompanying Konstantin Reutski called the police. Officers from the Lubotyn police department arrived a hour later and the human rights defender lodged a complaint about the incident and the confiscation of the video camera. The camera was later found without the memory card.

The following day, 30 January, the Department of the Ministry of Interior for the Kharkiv region published a statement on the events. According to the statement: “the driver [Konstantin Reutski] attempted to take something from his pocket, to which police officers quickly reacted by blocking his movements. The man considered the move as a possible attack against him, so he fell on the ground, and police officers tried to help him to get up and to offer necessary assistance”. The statement went on to say that the police officers involved in the incident had been suspended until the end of the investigation.