On 1 July 2016, human rights defender Ms Gloria Capitan was shot dead by two unidentified men in Lucanin village, Mariveles municipality, Bataan province. Since the start of her work opposing a coal mining and storage project in 2015, Gloria Capitan had faced intimidation and threats, allegedly from representatives of the companies owning the coal facilities. 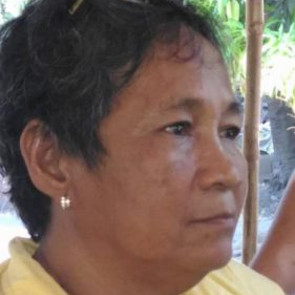 Gloria Capitan was one of the leaders of the Coal-Free Bataan Movement and the President of United Citizens of Lucanin Association (Samahan ng Nagkakaisang Mamamayan ng Lucanin), a community-based organisation that has been peacefully opposing the operation and expansion of coal plants and open storage facilities in the Mariveles neighbourhood which have had harmful consequences for the local population. As a part of her human rights work, Gloria Capitan organised campaigns, filed complaints with the court, collected signatures for petitions and initiated other public actions, calling for a permanent closure of a coal project undertaken in the region.

Gloria Capitan was attacked by two unidentified men riding motorcycles, who shot her several times in the neck and in one of the arms. She soon died of her wounds. An eight-year-old grandson of Gloria Capitan, who was present when the attack happened, suffered a scratch on his arm from a stray bullet. The Mariveles police is currently conducting an investigation into the killing of the human rights defender.

Since the start of her work opposing the coal mining and storage project in 2015, Gloria Capitan had faced intimidation and threats allegedly from representatives of the companies owning the coal facilities. According to reports, because of intense opposition from Mariveles residents, the coal companies have allegedly resorted to intimidation, creating tension and fear in the affected communities.

The Bataan province is the home of two coal power plants and two open coal storage facilities. The further expansion of coal production in the region is underway with the commissioning of at least  three new coal power plants by 2017. The heavy coal production in Bataan has resulted in the severe pollution of the area and the destruction of the coastline and of the sea bed. The local population, including the villagers from Lucanin where Gloria Capitan resided, suffer from skin allergies and respiratory diseases, which may be caused by the toxic coal ash that remains after the burning of coal in power plants.

Front Line Defenders roundly condemns the killing of Gloria Capitan, which it believes was solely motivated by her legitimate and peaceful activities in the defence of environmental rights of the people inhabiting the Bataan province.

2. Carry out an immediate, thorough and impartial investigation into the killing of human rights defender Gloria Capitan, with a view to publishing the results and bringing those responsible to justice in accordance with international standards;

3. Guarantee in all circumstances that all human rights defenders in the Philippines are able to carry out their legitimate human rights activities without fear of reprisals and free of all restrictions.