About Gladys Lanza Ochoa
Status:
Harrassment & Sentenced
About the situation

In May, 2017, the Supreme Court of Justice (CSJ) definitively suspended the judicial proceedings against Gladys Lanza for the crime of slander. The pardon took place after she passed away in September 2016.

The human rights defender has experienced increased harassment since a request was presented on 21 August 2015 urging the Supreme Court of Honduras to rule on an appeal lodged on 26 April 2015. This appeal challenges the decision of the Tribunal of Tegucigalpa to sentence Gladys Lanza Ochoa to 18-months imprisonment on 26 March 2015 on charges of defamation and slander. The request lodged on 21 August 2015 urges the court to ensure an immediate ruling on the case, as it had already exceeded the 60-day period within which a ruling must be issued. 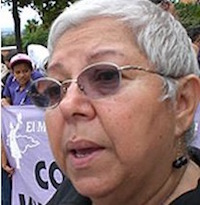 Gladys Lanza Ochoa passed away at the age of 74 on 20 September 2016  due to  health problems. At the time of her passing she was still fighting against her imprisonment for the simple act of defending the rights of women in the country.

The human rights defender has experienced increased harassment since a request was presented on 21 August 2015 urging the Supreme Court of Honduras to rule on an appeal lodged on 26 April 2015. This appeal challenges the decision of the Tribunal of Tegucigalpa to sentence Gladys Lanza Ochoa to 18-months imprisonment on 26 March 2015 on charges of defamation and slander. The request lodged on 21 August 2015 urges the court to ensure an immediate ruling on the case, as it had already exceeded the 60-day period within which a ruling must be issued.

On the afternoon of 27 August 2015, an investigator from the ATIC, Mr Edwin Flores, visited the offices of Visitación Padilla for the second time in two days. On 26 August 2015, at around 3pm, he had visited and submitted a request to access the organisation's security cameras recordings within 24 hours. The investigator was unable to provide any evidence to justify this intervention. The cameras were installed when the Inter-American Court of Human Rights ordered provisional security measures for Visitación Padilla in order to protect its members from harassment and also to protect the women who seek the asisstance of the office following exposure to violence. These recordings are strictly confidential as they contain sensitive information that, if disclosed, would put the women at risk. The investigator, though in posession of a warrant, failed to present any justification on why these recordings were needed.

When Edwin Flores visited Visitación Padilla on 27 August 2015, Gladys Lanza Ochoa refused to hand over the recordings, explaining that the organisation works with women who are victims of violence and the disclosure of any personal information could put them in serious danger. The investigator then began to question several members of the organisation about their work in the defence of human rights, in particular regarding the communities and women with whom they work, inquiries which the human rights defenders felt had no connection to their original request about the security videos.

Human rights defender, Gladys Lanza Ochoa, continues to face intimidation and harassment following her sentencing to 18-months imprisonment on 26 March 2015. An appeal against the sentencing has been lodged before the Supreme Court of Honduras.

Most recently, on 14 May 2015, the human rights defender was followed by unidentified persons riding motorcycles and driving a car that did not bear registration plates. This intimidation occurs right after Gladys Lanza Ochoa's lawyer launched her appeal before the Supreme Court against her sentence to 18 months in prison.

On 14 May 2015, as she was leaving her home, Gladys Lanza Ochoa reported being followed by two unknown men on separate motorcycles. Both motorcycles stopped beside the human rights defender before driving off in separate directions. Four blocks from her home she noticed one of the motorcycles again. The motorbike came back around again as she got on a bus. When she arrived at her final destination, approximately 45 minutes later, and got off at the bus station in San Felipe, she noticed the presence of a black Honda CRV, with tinted windows, and without any registration plates. Gladys Lanza Ochoa decided to get into a taxi and asked the taxi driver to take her to the bank. The black car appeared to follow them, and stopped outside the bank when the human rights defender went in. After half an hour, and seeing that the black car was still waiting outside, Gladys Lanza Ochoa got back in the taxi, which had been waiting for her, and immediately informed the taxi driver that they were being followed. The taxi driver then took a different route and managed to lose the car, which was again following them.

In Lanza Ochoa's most recent case, “defamation and slander” refer to her public advocacy in support of a former FUNDEVI employee, who in 2011 reported that the organization's Executive Director sexually harassed her on numerous occasions. The alleged victim sought help from Visitación Padilla, following which Lanza Ochoa and her organization assisted the woman in making public the sexual harassment accusations. Initially, the court ruled in favour of the alleged victim, but overturned the ruling upon appeal. FUNDEVI's Executive Director, defendant in the sexual harassment case, then brought charges against Lanza Ochoa. The human rights defender's lawyers have appealed the 18 month sentence before the Supreme Court.

As Lanza Ochoa's case demonstrates, women human rights defenders in Honduras work under extremely dangerous social and political circumstances, and are at risk each time they advocate for fellow Hondurans. The Central American country currently has highest number of homicides per capita in the world, with journalists, opposition leaders, young people, environmental rights activists, and women suffering heightened risk of abuse and targeting. In 2012, the Mesoamerican Women Human Rights Defenders Initiative registered 119 attacks on women activists throughout the country.

Violence against women has also taken its tole on women's ability to work for democratic change in Honduras, including within the electoral process. In the run-up to the 2013 elections, domestic and international rights groups reported “constant human rights violations, acts of violence and impunity” which cast “serious doubt on the process,” and restricted women's ability to safely campaign and vote. The International Observatory of Women’s Human Rights and Resistance, which sent more than 90 observers to document women's activism and human rights “before, during, and after the election, found “coercive conditions surrounding voting and serious doubts regarding the process and results.” Berta Cáceres, Honduran human rights defender and general coordinator of Consejo Cívico de Organizaciones Indígenas Populares (Civic Council of Popular Indigenous Organisations), said at the time:

The repression we are up against leaves us with a clear message, that we have to be capable of analysing it. We are the targets of powerful elements that aim to dismantle, demobilize and neutralize us. Just like all the other men and women in this country who are involved in the struggle, I am extremely vulnerable. In a system of total impunity that criminalizes us, with a judicial system that does not respond to our denouncements, we need to protect ourselves.

The charges brought against Lanza Ochoa on 26 March 2015 reflect the almost absolute risk of reprisal against women who fight for gender rights in Honduras, now including the risk of “defamation” charges and jail time for advocating on behalf of alleged victims of sexual harassment. Front Line Defenders is gravely concerned at the sentencing of human rights defender Lanza Ochoa, as it believes the charges against her were directly linked to her legitimate work in the defence of human rights.

Human rights defender Ms Gladys Lanza Ochoa will be sentenced on 25 February 2015 following her conviction on 28 January 2015 on charges of defamation and slander against the Executive Director of the Fundación para el Desarrollo de la Vivienda Social, Urbana y Rural – FUNDEVI (Foundation for Development of Urban and Rural Social Housing).

Under Honduran law the human rights defender faces a possible sentence of between one year and 4 months and two years and 8 months' imprisonment. The charges against Gladys Lanza Ochoa relate to her public advocacy in support of a former employee of FUNDEVI who claimed in 2011 to have been made redundant after being subjected to an extended period of sexual harassment by the Executive Director of the company. Visitación Padilla organised a peaceful demonstration outside the FUNDEVI offices, posted placards and issued press releases in relation to the case and the alleged victim was successful at first instance in her case claiming sexual harassment, but the ruling was overturned upon appeal.

Gladys Lanza Ochoa, as well as other members of Visitación Padilla have regularly been the victims of threats, intimidation and surveillance over recent years. In 2010, the Inter-American Court of Human Rights recognised the risk that the human rights defender faces as a result of her work, and ordered provisional measures for her protection. Previously, in 2009, the Inter-American Commission on Human Rights granted precautionary protection measures for her and the State of Honduras accepted the request. However, these orders were never complied with by the State of Honduras.

The Honduran Government has yet to comply with the Inter-American Court of Human Rights order to take measures to safeguard the life of human rights defender Ms Gladys Lanza Ochoa despite continuous threats against her, as well as against her family members, most recently on 22 August 2012.

On 22 August 2012, an unidentified man riding a black motorcycle without licence plates approached Gladys Lanza Ochoa in the street half a block from her home. The man, dressed all in black and wearing a black motorcycle helmet, asked her for directions, but the human rights defender, fearing for her safety, continued walking and entered a nearby business. Meanwhile, a black van with tinted windows and without licence plates appeared suddenly and drove slowly past.

A short while later when she thought the danger had passed, Gladys Lanza Ochoa left the premises where she had sought refuge only for the black motorcycle to reappear. Upon seeing her, the unidentified man turned the motorcycle around and drove away.

This incident is the latest in a series of threats and intimidatory acts against Gladys Lanza Ochoa. On 21 July 2010, Front Line Defenders issued an urgent appeal regarding death threats against the human rights defender. Furthermore, the urgent appeal issued by Front line Defenders on 5 April 2012 detailed acts of violence against Gladys Lanza Ochoa and her colleagues perpetrated by police. Family members have also reported being followed by unknown individuals who have at times taken photographs of them.

On 2 September 2010, the Inter-American Court of Human Rights ordered provisional measures for the protection of Gladys Lanza Ochoa. Previously, on 24 July 2009, the Inter-American Commission on Human Rights granted precautionary protection measures for her and the State of Honduras accepted the request on 5 October 2009. However, to date neither of these orders have been complied with by the State of Honduras.