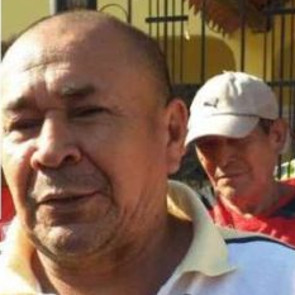 José Ángel Flores was the President of the Movimiento Unido Campesino del Aguán (Aguán United Farmers' Movement, MUCA), an organisation created in 2006 to defend the land rights of small-scale and subsistence farmers in the Aguán Valley. Along with other land rights leaders from diverse farmers' organisations in the Aguan Valley, José Ángel Flores was a beneficiary of precautionary measures issued by the Inter-American Commission on Human Rights on 8 May 2014 (No. 50-14). However, the Honduran state failed to implement this request, as evidenced by the absence of protective measures for the human rights defender as well as the judicial harassment experienced by him and his relatives as a result of his peaceful human rights work.

On 21 October 2016, the Chair of the Subcommittee on Human Rights of the European Parliament, Elena Valenciano (S&D, ES) strongly condemned the assassination of human rights defenders José Ángel Flores and Silmer George.  She urged the Honduran authorities to conduct a serious and thorough investigation into the killings, and to bring the perpetrators to justice.

"I extend my support and solidarity to all those peacefully defending the rights of their communities in the region with continued courage and conviction", concluded Valenciano.

The EU Delegation in Honduras also issued a statement urging the authorities to hold those responsible for the killings accountable.

Read the Full Statement in Spanish

Additionally, on 19 October 2016, the Office of the United Nations High Commissioner for Human Rights (OHCHR) in Honduras issued a statement condemning the killings of José Ángel Flores and Silmer George and expressing solidarity with their families, friends and the HRD community in the country.

Read the Full Statement in Spanish

In the evening of 18 October 2016, José Ángel Flores was attending a meeting with other land rights defenders in the farming cooperative of La Confianza, the seat of MUCA. When the human rights defender stepped out of the meeting he was shot repeatedly by unidentified men who immediately fled the scene on motorcycles.  José Ángel Flores was killed instantly. Fellow land rights defender and MUCA member Silmer George was also shot, and died from his injuries after being transferred to the San Isidro de Tocoa hospital.

The killing of José Ángel Flores comes after a long series of threats, acts of intimidation, and judicial harassment against the defender, his family and other land rights defenders in the Aguán Valley. On 15 March 2016, police officers forced their way into Flores' house in La Confianza, conducted a raid without a search warrant, and arrested him despite his poor health at the time. Ms Orbelina Flores, fellow land rights defender and member of the Permanent Observatory for Human Rights of the Lower Aguán (Observatorio Permanente de Derechos Humanos del Bajo Aguán, OPDHBA) was also arrested during the raid and was later unduly charged with land grabbing as a means of judicial harassment. Both defenders were released shortly after.

On 28 September 2016, Front Line Defenders reported on another violent attack against human rights defenders, campesino leaders and farmers in the Aguán Valley. Members of the community had moved into a parcel of land in an effort to recover it, claiming it was illegally used by a private company. At approximately 3:00am security guards of the farm violently attacked the farmers by ramming into the entry gate with their car, throwing rocks and shooting at the crowd of men, women and children. During the attack, human rights defender Reyna Mireya Figueroa endured gunshot wounds.

On 8 May 2014, the Inter-American Commission on Human Rights granted precautionary measures to 123 land rights defenders in the Aguán Valley, including members of the MUCA, the Movimiento Campesino Recuperación del Aguán (Farmers' Movement for the Recovery of the Aguán, MOCRA), the Movimiento Campesino Fundación Greogrio Chávez (Farmers' Movement Foundation Gregorio Chávez, MCRGC) and the Movimiento Auténtico Reivindicador Campesino del Aguán (Authentic Farmers Vindication Movement, MARCA). The Commission granted the measures as a result of a number of killings, disappearances, kidnappings, instances of torture, threats, forced evictions, persecution and stigmatisation against members of land rights organisations in the Aguán Valley. These acts of intimidation, the Commission asserted, were presumably perpetrated with the objective of intimidating the land rights defenders into selling their land and stopping their human rights work. Since 2009 there have been 150 violent deaths and at least 6 disappearances related to land rights conflicts in the Aguán region.

Front Line Defenders strongly condemns the killing of human rights defenders José Ángel Flores and Silmer George, which it considers to be in retaliation against their legitimate and peaceful work in defence of land rights. Front Line Defenders is deeply concerned about the dangerous and often deadly environment for human rights defenders working in defence of land and environmental rights in Honduras and urges the State to provide adequate and effective protective measures, in consultation with the defenders, to guarantee their safety and security.

2. Carry out an immediate, thorough and impartial investigation into the killings of José Ángel Flores and Silmer George, with a view to publishing the results and bringing those responsible to justice in accordance with international standards;

3. Immediately take all necessary measures, in consultation with the defenders, to guarantee the physical and psychological integrity and security of all land rights defenders in the Aguán  Valley, as well as of the members of their families, in particular by complying with precautionary measures No. 50-14 prescribed by the Inter-American Commission of Human Rights on 8 May 2014;