About Tomás Gómez Membreño
Status:
Assassination Attempt
About the situation

On the evening of 10 October 2016, COPINH General Coordinator Mr Tomás Gómez Membreño was driving to his house from the organisation's office in La Esperanza, Intibucá, when gunmen opened fire on his vehicle. 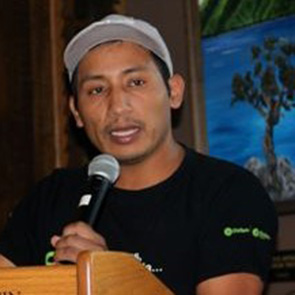 Tomás Gómez Membreño is a member of Consejo Cívico de Organizaciones Indígenas Populares – COPINH (Civic Council of Popular Indigenous Organisations). COPINH is currently involved in a campaign for the defence of the Gualcarque river which is the site of a proposed dam to be built by the Honduran company FICOHSA and the multinational SINOHYDRO.

On the evening of 10 October 2016, COPINH General Coordinator Mr Tomás Gómez Membreño was driving to his house from the organisation's office in La Esperanza, Intibucá, when gunmen opened fire on his vehicle. That morning, COPINH local leader Mr Alexander García Sorto was awaken by shots fired through the door and window of his house as he slept inside with his wife and two daughters in Llano Grande, Colomoncagua. Both human rights defenders survived the assassination attempts.

COPINH members have been the targets of persistent violence as a result of their legitimate human rights work, with attacks having intensified after the killing of its co-founder, leader and Goldman Environmental Prize laureate Berta Cáceres on 3 March 2016. Shortly after Berta Cáceres’ assasination, on 15 March 2016, an unknown attacker shot dead COPINH member Nelson García, as he returned to his home in Río Lindo. On 5 March 2016, the Inter-American Commission on Human Rights granted precautionary measures (No. 112-16) to COPINH members, however they remain inadequately implemented by Honduran authorities.

Tomás Gómez Membreño and Alexander García both survived previous attacks. On 8 May 2016, Tomás Gómez Membreño was travelling with colleagues to attend a demonstration in Tegucigalpa. On their way, an army vehicle driven by military personnel started following them and attempted to force them off the road. The driver was able to control the vehicle, scarcely avoiding an accident. On 6 May 2016, a gunman repeatedly shot Alexander García Sorto outside his home in Llano Grande. He was wounded in his left shoulder but survived the attempted killing. The attacker was identified as Enedicto Alvarado, a former member of the military and private security guard who had previously threatened to kill Alexander Garcia Sorto and had exhibited hostile behaviour against COPINH members. The local police briefly detained Mr Alvarado, but they released him on the same day after charging him with illegal possession of firearms.

Front Line Defenders condemns the second set of assassination attempts against COPINH leaders Tomás Gómez Membreño and Alexander García Sorto and urges the State of Honduras to conduct an independent, impartial and exhaustive investigation in order to bring to justice the perpetrators. Furthermore, Front Line Defenders calls upon the State of Honduras to adequately implement the precautionary measures granted by the Inter-American Commission on Human Rights, in consultation with the human rights defenders.