About the Telangana Democratic Front (TDF) 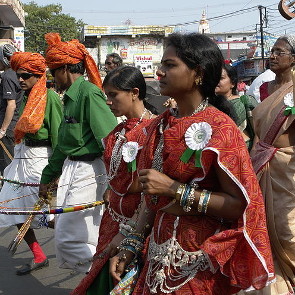 Telangana Democratic Front (TDF) is a fact finding team that investigates human rights violations committed against the indigenous tribal group Adivasis, including extra-judicial killings by security forces in the Chhattisgarh state, located in central India. The seven human rights defenders are Balla Ravindranath, a lawyer and the general secretary of the Committee for Release of Political Prisoners (CRPP), Chikkudu Prabhaker, a lawyer, Durga Prasad, an independent journalist in Hyderabad, Duddu Prabhakar, the president of AP Kula Nirmulana Porata Samiti (Committee for Caste Annihilation), Rajendra Prasad and Nazeer, who are both research scholars from Osmania University and members of Telangana Vidhyarthi Vedika (Telangana Students Forum) and Ramanala Laxmaiyya, a research scholar from Osmania University.

On 3 January 2017, a district court in Dantewada, South Chhattisgarh, rejected the bail of all seven members of the TDF fact finding team. The TDF team are currently appealing the decision with the High Court in Dantewada. According to the Chhattisgarh Special Public Security Act (CSPSA), 2005 section 8(4), the police are required to receive written permission from the Superintendent of Police before undertaking any investigation into cases under the CSPSA. As the the investigation and arrests of the seven human rights defenders were carried out without receiving prior permission from the Superintendent of Police, they are illegal.

On 24 December 2016, the TDF team was traveling to Sukma to investigate complaints of human rights violations on the indigenous tribal group Adivasis. Around 9:30 a.m., the Telangana police arrested them in Dummugudem village, Khamman district and  held them under arrest until the following day. At around 7 p.m on 25 December 2016, they were transferred to the Chhattisgarh police at Kunta Police Station. In the morning of 26 December 2016, the TDF team were presented before the court in Sukma and remanded in custody.  A criminal case was filed against the seven human rights defenders under the Chhattisgarh State Special Public Security Act, sections 8(1), 8(2), 8(3) and 8(5) for allegedly assisting the Maoists and possessing banned currency notes and Maoist literature.

Front Line Defenders expresses grave concern at the arrest of the seven human rights defenders of Telangana Democratic Front and the charges against them, which it believes as solely motivated by their peaceful and legitimate work in human rights, and in particular their efforts to seek justice for abuses committed by security forces in the Chhattisgarh state.

1. Immediately drop all charges against the seven members of Telangana Democratic Front (TDF);