On the night of 14 July 2016, human rights defenders Ms Adriana Linares Arroyo and Ms Rubí Cortés Salazar were photographed by an unknown male individual as they got into their vehicle and were then followed by another vehicle as they drove from Oaxaca to Tlaxiaco. 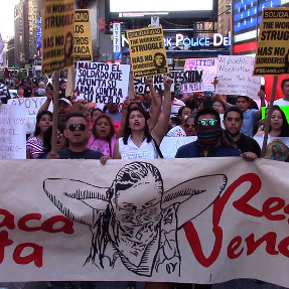 On the night of 14 July 2016, human rights defenders Ms Adriana Linares Arroyo and Ms Rubí Cortés Salazar were photographed by an unknown male individual as they got into their vehicle and were then followed by another vehicle as they drove from Oaxaca to Tlaxiaco.

Rubí Cortés Salazar is a Mixteca human rights defender member of the Alianza Multicultural de Mujeres Originarias y Radicadas en Tlaxiaco (AMMOR, Multicultural Alliance of Women from Tlaxiaco). She is the President of the Committee for the Defence of Public Education and has played a crucial role in mobilising parents to advocate for their children's right to education. Adriana Linares Arroyo is an indigenous Mixteca human rights defender and the General Coordinator of the Coordinadora Estatal de madres, padres de familia y tutores en defensa de la educación laica y gratuita (State Coalition of mothers, fathers and tutors in defence of secular and free education).

On 14 July 2016 at approximately 20h30, Adriana Linares Arroyo and Rubí Cortés Salazar were getting into their vehicle outside the Oaxacan Teachers' Hotel (Hotel del Magisterio Oaxaqueño) when an unknown individual in plain clothes began to take photographs of them and the licence plate of their car. The two human rights defenders were accompanied by three other teachers from the Mixteca region. As they started driving towards Tlaxiaco, the human rights defenders noticed a dark blue vehicle was following them. The car continued to follow them until Viguera, where the passengers decided to return to the city centre due to their security concerns and were able to lose the dark blue vehicle.

These acts of harassment against the two human rights defenders are the latest in a series of incidents intended to intimidate them. For the past months, Adriana Linares Arroyo and Rubí Cortés Salazar have been the target of phone interventions, acts of defamation, criminalisation, surveillance, and intimidation from individuals who appeared to be from the police and the military. On 22 June 2016, both defenders attended a meeting with the State Secretary Miguel Ángel Osorio Chong. Due to a higher number of threats and acts of intimidation against them, on 17 June 2016, the human rights defenders had requested protective measures, which were initially refused but upon a second request, were approved.

Other women human rights defenders who support the teachers social movement in Oaxaca have also been intimidated and surveilled, such as in the case of Soledad Ramos Mendoza who advocates for the rights of indigenous peoples. The human rights defender is the State Coordinator for Mothers and Fathers in Oaxaca, where she has played an important role mobilising and informing civil society around the reform in the education sector. On 14 June 2016, the human rights defender was followed by three vehicles of the municipal police. On 13 June 2016, at approximately 22h, before entering her vehicle, Soledad Ramos Mendoza noticed that an unknown male was standing nearby in the car park. As she got into her vehicle, he made a phone call, and then proceeded to follow her in his own vehicle as Soledad drove away. The human rights defender made several detours until she finally lost the vehicle.

Crackdowns have taken place in Oaxaca around May and June each year since 2013, when a reform to public education was first approved by the Federal Parliament without the consultation of teachers. On 19 May 2016, the Secretary of Public Education Aurelio Nuño Mayer announced that 3,119 teachers would be dismissed as a result of their participation in the protests, with the majority of these concentrated in Oaxaca, Guerrero and Michoacán.

On 19 June 2016, a police operation against demonstrators in Nochixtlán, Telixtlahuaca, Huitzo, Viguera and Hacienda Blanca left at least 8 dead and over 120 injured. To date, there are 75 leaders of the Sindicato Nacional de Trabajadores de la Educación (National Union of Education Workers, (SNTE) Oaxaca group in prison as a result of judicial harassment. This figure includes indigenous human rights defender Damián Gallardo Martínez, whose detention was declared arbitrary and unlawful in November 2014 by the United Nations Working Group on Arbitrary Detention (WGAD). Despite a call by the UN WGAD and a host of civil society organisations to quash his conviction and release him immediately, Damián Gallardo Martínez remains in prison where he has endured torture and inhumane, cruel and degrading treatments in retaliation for his legitimate human rights work.

Front Line Defenders condemns the acts of intimidation against Adriana Marcelina Linares Arroyo, Rubí Jazmín Cortés Salazar and Soledad Ramos Mendoza as well as the repression of the teachers' social movement in Oaxaca.

1. Carry out an immediate, thorough and impartial investigation into acts of intimidation and threats against Adriana Linares Arroyo, Rubí Cortés Salazar and Soledad Ramos Mendoza with a view to publishing the results and bringing those responsible to justice in accordance with international standards;

3. Cease targeting human rights defenders associated with Section 22 of the SNTE and guarantee in all circumstances that they are able to carry out their legitimate human rights activities without fear of reprisals and free of all restrictions including judicial harassment.

4. Guarantee in all circumstances that all human rights defenders in Mexico are able to carry out their legitimate human rights activities without fear of reprisals and free of all restrictions including judicial harassment.