Brutal and corrupt dictatorships trying to use sport to improve their image is nothing new, as The Guardian noted in February when it compared club ownership and the Champions League to Mussolini and the 1934 World Cup. However, the absurd news that the Dakar Rally will take place in Saudi Arabia in 2020 - compounded by reports that an offer is under consideration to bring the Spanish Super Cup to the same country in a €30 million per year, 6-year deal- brings blood drenched sportswashing to new depths. 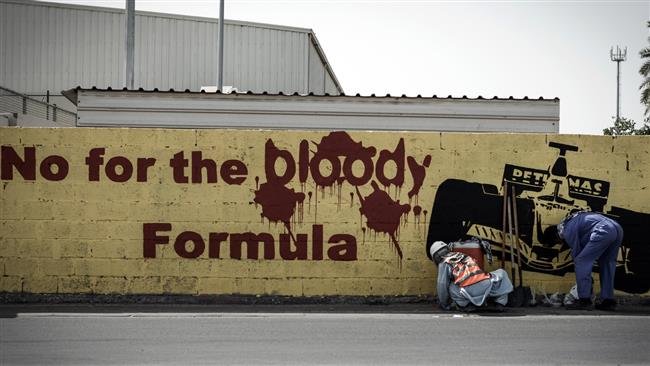 Protest graffitti against the Formula One race in Bahrain.

As the International Federation for Human Rights reported the Dakar Rally announcement comes not only in the wake of the murder of journalist Jamal Kashoggi and amidst Saudi war crimes in Yemen, but as women human rights defenders are being tortured in detention for campaigning, amongst other things, for the right of women to drive. The same Saudi rulers who order the killings and torture are seeking to buy positive coverage through sport.

"The same Saudi rulers who order the killings and torture are seeking to buy positive coverage through sport."

As someone who was at Wembley in 1992 to see Barcelona lift their first European Cup, it is particularly galling to contemplate the Cruyff-inspired masters of the beautiful game being dragged into the sportswashing of Mohammad bin Salman. The Barcelona slogan is “More Than a Club” and is explicitly linked to both values and social change. It is difficult to reconcile these noble aspirations with a PR exercise for a misogynist regime, itself the antithesis of those values.

We are, of course, already far down the slippery slope. The rulers of the UAE have also long-used sport as part of their self-promotion. The owners of Manchester City and the sponsors of Real Madrid are similarly involved in war crimes in Yemen, and routinely detain and torture those who dare to speak out for human rights. Ahmed Mansoor, winner of the Martin Ennals Prize in 2015 for his peaceful work for human rights, is currently on hunger strike in protest against prison conditions and his sentencing to 10 years in prison after an unfair trial. Front Line Defenders is gravely concerned for his health and is calling for his release.

Sunday, 28th April, Formula One will hold the Azerbaijan Grand Prix in Baku. The Azeri dictator, Ilham Aliyev, who routinely detains human rights defenders and journalists, is also President of the country’s Olympic committee. He has embraced sportswashing enthusiastically. Azerbaijan hosted the European Games in 2015 under the auspices of the European Olympic Committees. The 2019 European Games are to be in Belarus. The Formula One calendar also includes Bahrain, Abu Dhabi (UAE) and China, all countries where Front Line Defenders is campaigning for the release of unjustly detained human rights defenders.

Protest against first European Games in Baku in 2015.

Many sports fans will shrug their shoulders and say that money is awash in international sport, and what can you do? The International Olympic Committee and football’s world governing body FIFA have been mired in corruption scandals and the use of international sporting events and national Olympic committees have long been seen by dictators, authoritarians and fascists as tools for advancing propaganda. But it is surely time to draw a line in the sand, and where better to do it than Saudi Arabia? The Dakar Rally should not take place there while women human rights defenders like Lujain Al-Hathloul are detained and tortured. And the Spanish Football authorities must reject the proposed Saudi deal in spite of the vast sums of money on the table.

Sportswashing is more than a game, it is a corrupt exercise of cover-up and repression. And sport must reject the tyrants.