On 10 September 2020, Yury Korzun, a miner from Belarusian city of Salihorsk chained himself to a piece of equipment 300 meters below the surface. Belarusians commented it happened because “another person has handcuffed himself to the presidential chair”.

In a letter, Korzun wrote that he just recently turned 42, his whole life was spent under Lukashenka’s rule and he has never been interested in politics, but he couldn’t stand the situation in which law enforcement officers were beating, torturing and raping peaceful protesters with total impunity and when more than 80 people are still missing.

In the aftermath of the 9 September presidential elections marred by important electoral fraud and followed by unprecedented scale of police repression, employees of many state enterprises have gone on strike supporting protesters demands, including the resignation of Lukashenko, new fair elections and justice for victims of police violence. A strike was declared in at least 30 Belarusian enterprises. This has never previously happened during waves of protest in Belarus, where independent trade unions have been systematically targeted by the authorities and their leaders ruinously sentenced. (See for example: https://www.frontlinedefenders.org/en/case/gennady-fedynich-and-igor-kom....) At a symbolical level, the strike was disastrous for Lukashenko’s public image presenting him as working class president.

Belarusian human rights organizations stress the dependence of employees on state-owned enterprises or join stocks companies: the employees are forced to assist in state propaganda lessons, sometimes to be part of electoral commissions, to vote in preliminary voting (polling stations are open for 7 days – this system helps to secure the participation and also to influence the choice of state dependent categories of population like soldiers, students, workers of state factories, etc). Some workers reported that their enterprises changed the work hours preventing them from voting, or shut down the Internet in attempt to prevent political mobilisation. 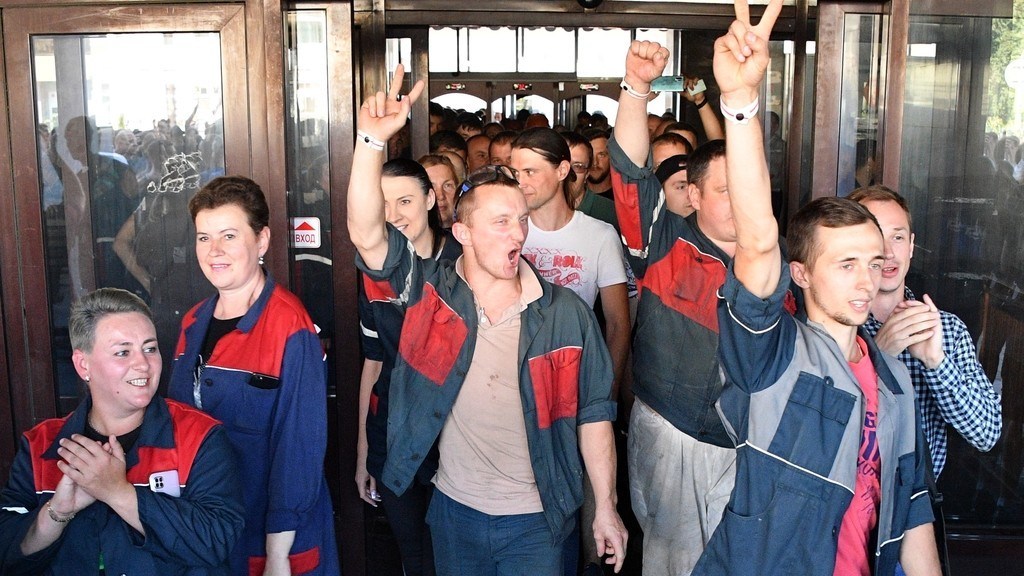 Yury Korzun works for Belaruskali, world’s largest producer of potash fertilizer and one of the biggest contributors to the state budget, in 2019, its exports accounted for $2.78 bilion. On 17 August, more than 600 miners of the Belaruskali went on strike demanding the resignation of Lukashenko. The repression almost immediately started: on 20 August, a member of Belaruskali’s strike committee Dmitry Kudelevich was arrested by KGB (state security committee) officers and brought to the police station from where he managed to escape via a window. Several strikers have been fired, underwent police searches at their homes, and their family members have been targeted. Several leaders of strike committees have been pressured and detained; at least 8 workers were fired. Leanid Markhotka, member of Belarusian Helsinki Committee assisting the strike committee of Belaruskali, was sentenced to 10 days administrative detention. On 31 August, Anatoly Bokun, co-chairman of the strike committee of Belaruskali was arrested and sentenced to 15 days of administrative detention for organizing an unauthorized protest.

Korzun’s one-man uderground strike only lasted for a couple of hours; he was taken out by force and brought to a local hospital, which he left after a medical check. Several dozens of miners marched in support of Yury Korzun in Salihorsk.

On 11 September 2020, in the first judicial hearing concerning strikes in the history of Belarus, a Minsk regional court deemed the Belaruskali strike illegal.

Around 20 workers of Belaruskali continue the strike.