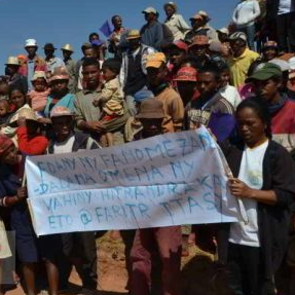 On 23 September 2016, the Court of First Instance at Anosy ordered pre-trial detention for two environmental rights defenders, Messrs Pierre Robson and Tsihoarana Andrianony and charged them on four counts including breach of state security. Their arrest follows a series of mass protests that the two defenders helped to organise against gold mining at Soamahamanina by a Chinese company, Jiuxing Mines S.A.R.L.

Pierre Robson and Tsihoarana Andrianony are the co-presidents of the association VONA, a local organisation that defends environmental rights, and which was one of the main groups organising the recent mass movement at Soamahamanina. VONA is supported by the TANY Collective, a coalition of organisations working to defend Malagasy land and natural resources against land grabbing, and to support development for both urban and rural citizens of Madagascar. The campaign called for suspension of gold mining in the region, amid accusations of irregularities by the defenders and other environmental actors.

On 6 July 2016, the TANY Collective addressed an open letter to the President of the Republic where they requested his intervention to discontinue the gold, zinc, iron, lead and berillium mining at Soamahamanina and in the surrounding area. Among the problems raised to warrant their request were (1) lack of participation and consultation of the population; (2) the lack of respect for the rights of the population that lives at these locations including the lack of respect for their land rights; and (3) degradation of the environment including adverse impact on two rivers, the Ikalariana and the Irihatra, destruction of the tapia forest, and destruction of nearby hills and plains.

On 15 September 2016, the defenders had requested that the government order a permanent shutdown of activities by Jiuxing Mines S.A.R.L. After one week had elapsed without a response to their request, on 22 September 2016, the inhabitants of Soamahamanina went to the streets to protest. The protest resulted in violence as the police released tear gas on the protesters and certain members of the protest threw rocks. Pierre Robson and Tsihoarana Andrianony were not involved in the violence. Later in the day, the defenders were followed by law enforcement officials who arrested them. After a preliminary interview at Miarinarivo, the defenders were transferred to Antananarivo as subjects of an investigation at the court at Anosy.

On 23 September 2016, the defenders were tried in court and charged on four counts.  The charges include breach of state security, leading a non-authorised protest, and destruction of common property. The defenders will also be held responsible for a law enforcement official’s loss of his gun, that disappeared during the dispersal of the protesters at Soamahamanina. After they were indicted, the defenders were taken to a detention center at Antanimora where they await their trial.

I am sincerely concerned by the arrest and indictment of defenders Pierre Robson and Tsihoarana Andrianony as they are solely motivated by their promotion of and protection for rights linked to the environment.

I urge the authorities in Madagascar to:

1. Immediately and unconditionally release Pierre Robson and Tsihoarana Andrianony, and drop all charges against them;

2. Guarantee in all circumstances that all human rights defenders in Madagascar are able to carry out their legitimate human rights activities without fear of reprisals and free of all restrictions.