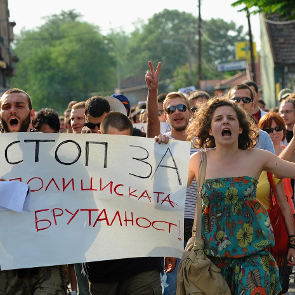 The Macedonian Helsinki Committee (MHC) is an organisation working for the promotion and greater protection of human rights, as well as the enhancement of democratic order in Macedonia. The MHC monitors the human rights situation in Macedonia, provides legal assistance and counselling to citizens in cases of violation or restriction of rights and freedoms, and conducts human rights education and campaigns. Gordan Kalajdziev is a professor in the Criminal Law Department at the Iustinianus Primus Faculty of Law in Skopje and the President of the MHC. Uranija Pirovska is a prominent human rights lawyer and the MHC’s Executive Director, and Kocho Andonovski is an LGBTI rights defender and the Programme Manager of the MHC.

On 9 December 2016, it came to the attention of the MHC that the Civic Movement for the Defence of Macedonia (CMDM), an organisation that openly supports the governing political party, widely circulated leaflets smearing and defaming the MHC in the city of Skopje. The leaflets include a list of more than 40 named individuals, among which are human rights defenders, civil activists, journalists, professors, opposition party members, and members of their families, as well as the names of 20 non-governmental organisations and media outlets in Macedonia. Gordan Kalajdziev, Uranija Pirovska, and Kocho Andonovski’s names and salaries were included on this list. In the leaflets, the CMDM  alleges that those civil society actors on the list use the foreign funding they receive to “terrorise the state” and “spit on, throw color against, or destroy monuments of the Macedonian culture, history, identity, and the buildings of the state institutions”. CMDM urges the public "to speak up against the opposition who attempts to redefine and disintegrate the state". Prior to this, on 21 April 2016, CMDM called for the Constitutional Court to temporarily ban all non-governmental and human rights organisations that receive foreign funding or are critical of the government.

On 6 December 2016, representatives of the Macedonian Revenue Office (MRO) called the office of the MHC to notify them that an inspection of the organisation’s financial activities will begin on 14 December. This is not the first time that the MHC has been investigated by the Macedonian Revenue Office.  According to the MHC, financial information gathered by past inspections was shared with and used by the CMDM and state media in their continuous smear campaigns against the MHC and other human rights organisations and defenders.

This is not the first time that the MHC, its leaders, as well as their partner organisations, have been the target of defamation, threats and intimidation. On the evening of 5 December, 2016, when Uranija Pirovska was on her way home from work, she was subjected to verbal abuse, including misogynistic comments by an unknown man sitting in a passing car. The unidentified man threatened her, saying that she “should be subjected to punishment,’ for her human rights work. Apart from that, on 25 May 2016, the police in Skopje initiated administrative proceedings against Urania Pirovska regarding her participation in a peaceful public assembly protesting President Gjorge Ivanov’s decision to pardon all politicians under investigation for their alleged involvement in a massive wiretaping scandal in Macedonia.

On 2 December 2016, one of the MHC’s associates, the human rights organisation ‘Tekstil’, which works for the rights of textile workers in the city of Štip was attacked by a group of unknown persons. The windows of Tekstil’s office were broken by rocks and the panel reading ‘KUC — Tekstil’ was damaged. An investigation into the incident was opened upon Tekstil’s complaint.

I am concerned by the defamatory allegations, intimidations and threats against human rights defenders of the Macedonian Helsinki Committee and their associates, which I consider to be in retaliation to their legitimate and peaceful human rights work.

I urge the authorities in Macedonia to:

1. Carry out an immediate, thorough and impartial investigation into the instances of defamation campaigns and verbal abuse against the Macedonian Helsinki Committee and Urania Pirovska, with a view to publishing the results and bringing those responsible to justice in accordance with international standards;

2. Take measures to ensure that government officials, their affiliates, and media organisations refrain from making statements or declarations stigmatising the legitimate work of human rights defenders and civil society;

3. Guarantee the physical and psychological integrity and security of Urania Pirovska,  members of the Macedonian Helsinki Committee, and all individuals listed in the leaflets circulated by the Civic Movement for the Defence of Macedonia;

4. Cease targeting all human rights defenders in Macedonia and guarantee in all circumstances that they are able to carry out their legitimate human rights activities without fear of reprisals and free of all restrictions, including judicial harassment.