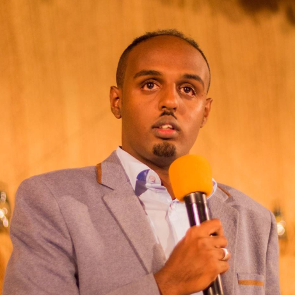 On 16 May 2016, human rights defender Mr Guleid Ahmed Jama received notification from the Somaliland Minister of Justice and Judicial Affairs that his licence to practice law had been terminated.

Guleid Ahmed Jama is a lawyer and founder of the Human Rights Center (HRC), a human rights watchdog organisation in Somaliland. The HRC works on five different fronts including lobbying, advocacy, protection, monitoring and documenting, to promote respect for human rights in Somaliland.

A letter circulated to members of the Somaliland judiciary from the Minister of Justice and Judicial Affairs, Minister Ahmed Farah Adarre, requests that the judiciary cease to allow Guleid Ahmed Jama to practice law, as his position as chairperson of the HRC and his work as a lawyer are incompatible. Having not been informed of the request personally, Guleid Ahmed Jama obtained a copy of this letter on 16 May 2016, although it was dated 10 April 2016. The termination of the human rights defender’s licence by the Minister of Justice and Judicial affairs is unprecedented. The duty of licensing permissions falls within the mandate of the Advocates Licensing and Disciplining Commission.

According to the letter from the Minister of Justice, the termination of Guleid Ahmed Jama’s licence to practice law is directly related to his work as a human rights defender. Guleid Ahmed Jama has been advocating the case of Mme Saado Jaamac Aadan at the national level. Mme Aadan is a civilian who was arrested without a warrant and is being tried in a military court on charges of communicating and sending money to men who allegedly killed a police commander in the Saahil region. Mme Aadan has been held in the Hargeisa Central Police Station without access to legal representation, and the fact that her trial is scheduled to be held in a military court rather than a civilian court violates the Somaliland constitution. For these reasons, Guleid Ahmed Jama has been advocating her case to the Somaliland Minister of Justice, the Minister of the Interior and the Attorney General.

The termination of the human rights defender's licence to practice law appears to be part of a pattern of ongoing harassment against him. In April 2015, Guleid Ahmed Jama was arrested, charged and detained in Hargeisa while working in his capacity as a lawyer at Hargeisa Regional Court. He was accused of 'subversive or anti-national propaganda’, 'instigation to disobey the laws', 'intimidation of the public' and ‘publication or circulation of false, exaggerated and tendentious news capable of disturbing public order’. According to the Office of the Attorney General, the human rights defender had allegedly committed these offences through his work at the HRC. This case was later closed.

I believe that the termination of Guleid Ahmed Jama’s licence to practice law is directly related to his work in the defence of human rights, in particular his advocacy for Mme Aadan after her arrest, charges, and detention without access to legal representation at the Hargeisa Central Police Station.

2. Guarantee in all circumstances that all human rights defenders in Somaliland are able to carry out their legitimate human rights activities without fear of reprisals and free of all restrictions including judicial harassment.