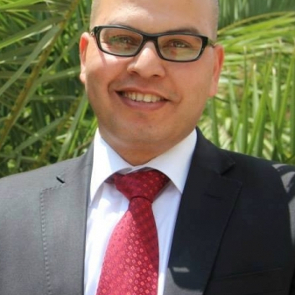 Farid Al-Atrash is a Palestinian lawyer and human rights defender in Hebron. He is chairman of the Independent Commission for Human Rights in Bethlehem and part of the Popular Struggle Coordination Committee (PSCC), a group which engages in community-based non-violent resistance of various forms, including strikes, protests, and legal campaigns. The PSCC also supports the Boycott, Divestment and Sanctions campaign. The Committee aims to document and expose violations of international law and injustice against families in areas of conflict under Israeli occupation, and to coordinate between various villages involved in struggles against the Wall, ethnic cleansing, settler expansion, and various aspects of Israeli Occupation. Issa Amro is a  human rights defender and founding member of many non-violent organisations in Hebron working peacefully against Israeli occupation of the West Bank, including Youth Against Settlements. He is involved in monitoring the application of international human rights and humanitarian law in the Occupied Palestinian Territories.

Issa Amro was released on 1 March 2016, having been arrested by Israeli soldiers on 29 February outside his house in Tel Rumeida while speaking to a tour group from Breaking the Silence, an organisation of veteran combatants from the Israeli military dedicated to exposing the reality of everyday life in the Occupied Territories. He was blindfolded, handcuffed and taken to Gush Etzion prison. Once at the station, he was accused of organising an illegal protest calling for the opening of Shudada Street, which was closed down by Israeli authorities following the Ibrahimi Mosque Massacre in 1994, and using social media to incite violence against Israel and the Israeli Army. He was warned to expect a summons to court upon being released the following day.

Farid Al-Atrash was released on 1 March 2016, on bail of 1,500 shekels (approximately €350). On 29 February 2016, the Ofer Israeli Military Court had ordered the extension of his detention period until 3 March 2016, at an urgent hearing requested by the Independent Commission for Human Rights. On 28 February 2016, the human rights defender had been transferred by Israeli police into the custody of the military prosecution, where he was held until his release. The charges against him are connected to a peaceful protest which took place on 26 February 2016, in the context of the annual protest to open Shuhada Street in the occupied West Bank district of Hebron, and to commemorate the Ibrahimi Mosque Massacre, which occurred in late February 1994. Farid Al-Atrash was arrested by Israeli Occupation Forces during the protest, along with several other demonstrators. The protest itself was violently suppressed by Israeli forces, who directly targeted demonstrators and journalists by firing tear gas, physically assaulting them and throwing stun grenades. Farid Al-Atrash, who was holding a sign reading 'Free Free Palestine' when he was arrested, was beaten before being taken to the Jaabara police station in the Kiryat Arba’ settlement.

The peaceful march took place in Hebron to commemorate the Ibrahimi Mosque Massacre, a deadly attack by an extremist Israeli settler during prayer time, which occurred in late February 1994 and resulted in the deaths of 29 people and injuries to more than 100 from live bullets. The Israeli authorities subsequently closed down the area surrounding the mosque, including Shuhada Street and the Tel Rumeida area of the Old City of Hebron in the occupied West Bank. The area has been designated as a closed military zone by the Israeli army and banned to the public, apart from Israeli settlers and Palestinian residents. Under Israeli military law, any demonstrations in the West Bank are illegal, whether non-violent or not.

I am extremely concerned about the detention of Farid Al-Atrash and Issa Amro and the accusations they face, as well as the beating of Farid Al-Atrash during his arrest. I believe the actions against them to be motivated by their legitimate and peaceful human rights activities in the Occupied Palestinian Territories.

I urge the authorities in Israel and the Occupied Palestinian Territories to:

1. Cease any further harassment of human rights defenders Farid Al-Atrash and Issa Amro, and drop any charges which may be outstanding against them;

2. Guarantee in all circumstances that all human rights defenders in the Occupied Palestinian Territories are able to carry out their legitimate human rights activities, including through the exercise of their right to free assembly, without fear of reprisals and free of all restrictions.