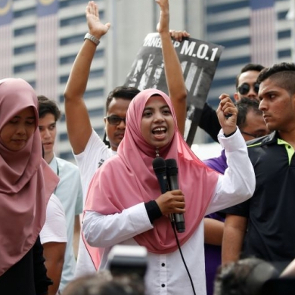 On 9 December 2016, student human rights defenders, Ms Anis Syafiqah, Mr Luqman Nul Haqim, Mr Luqman Hakim and Mr Suhail Wan Azahar were brought before a disciplinary panel and found guilty of violating the Universities and University Colleges Act 1971 (UUCA). They could face expulsion from the Universiti Malaya (University of Malaya) in Kuala Lumpur for their involvement in organizing a peaceful assembly against the corruption of  government officials on 27 Aug 2016. On 18 November, in a seperate incident, two of the student human rights defenders were detained by Malaysian police officers.

Anis Syafiqah is the chairperson of the Kesatuan Mahasiswa Malaysia- KESATUAN (Malaysian Graduates Union), and Luqman Nul Haqim is a committee member of the same union. Luqman Hakim is the president of  Persatuan Mahasiswa Islam Universiti Malaya- PMIUM (University of Malaya Students’ Union) and Suhail Wan Azahar is a committee member of the Persatuan Mahasiswa Islam (Islamic Student Society) in the University of Malaya. The four aforementioned individuals are student human rights defenders, who were involved in organizing a peaceful assembly called the “Tangkap Malaysian Official 1” (Arrest Malaysian Offical 1) against state corruption and the fraudulent use of a public trust, the 1Malaysia Development Berhad (1MDB). The human rights defenders are also involved with larger pro-democracy movements, including campaigns for electoral reform. On 8 December 2016, the four human rights defenders were awarded the 2016 Suaram Human Rights Award for their work.

The 1MDB was set up to boost Malaysia’s economy through investments and infrastructure agreements with foreign organisations. It was originally overseen by Malaysian Prime Minister, Mr. Najib, and began attracting attention, becoming the focus of national and international investigations after running up debts of $11 billion USD and missing repayments. The United States (US) authorities allege that $3.5 billion dollars in the Malaysian national wealth fund 1MDB money was misappropriated, and laundered through the US financial system. According to this investigation, Malaysian officials were responsible for the fraud. The ‘Malaysian Offical 1’ was mentioned 30 times in the lawsuit and is alleged to have received $731 million of the misappropriated funds. On 7 Oct 2015, the Conference of Rulers had expressed concern about the 1MDB scandal and urged the government to complete the investigation and to take appropriate  action. However, there has been no progress in the investigation and no one has been arrested in regards to this case. On 27 August 2016, the four human rights defenders organised the ‘Tangkap Malaysian Official 1’ rally, which calls for the arrest and investigation of the ‘Malaysian Offical 1’.

On 9 December 2016, the four human rights defenders were found guilty by the University of Malaya's disciplinary panel under the Universities and University Colleges Act 1971 (UUCA) for ‘acting in a manner detrimental and prejudicial to the interests and good reputation of the university’, and ‘acting in a manner detrimental to public safety’ for organising and participating in the Tangkap MO1 rally. A written decision regarding the details of the disciplinary action will be given within 14 days. The four human rights defenders face one or more of the following penalties: a warning, a fine of no more than RM 200 (€0.2), a ban on entering certain parts of the university for a determined period of time, suspension from the university for a determined period of time, or expulsion from the university. On 22 October 2016, the University Malaya issued a letter to the four students, summoning them for the disciplinary hearing on 9 December.

On 18 November, the evening before the Bersih 5 Rally to protest for electoral reform, two of the four student human rights defenders were detained. Luqman Nul Haqim was detained by police in Genting Sempah while he is on the way for a pre-Bersih function at 6:30 p.m, and at 9:15 p.m., police went to the home of Anis Syafiqah in Petaling Jaya and also detained her. Luqman Nul Haqim and Anis Syafiqah were held in the Kuala Lumpur police contingent headquarters and were released on 20 November.

The detention of the students is part of a a pattern of Malaysian authorities using detention as a means of targeting human rights defenders. I previously issued an appeal concerning the arrest of human rights defenders Maria Chin Abdullah and Mandeep Singh who were also detained on 18 November 2016 in connection with the Bersih 5 Rally.

I am concerned by the disciplinary proceedings against Anis Syafiqah, Luqman Nul Haqim, Luqman Hakim and Suhail Wan Azahar, and the detention of two of the human rights defenders, which I  believe to be directly linked to their peaceful and legitimate work in defence of human rights.

I urge the University of Malaya and Malaysian authorities to:

1. Quash the disciplinary charges against Anis Syafiqah, Luqman Nul Haqim, Luqman Hakim and Suhail Wan Azahar as it is believed that it is solely motivated by their legitimate and peaceful work in defence of human rights;

2. Cease targeting all human rights defenders in Malaysia and guarantee in all circumstances that they are able to carry out their legitimate human rights activities without fear of reprisals and free of all restrictions including detention and judicial harassment.