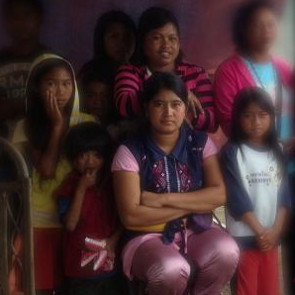 A recently released Department of Justice decision following an investigation into the killing of three members of the family of human rights defender Ms Erita Capion Dialang has recommended the filing of 3 counts of murder, 1 count of attempted murder, and violation of International Humanitarian Law against military personnel involved in the massacre of the Capion family.

Erita Capion Dialang is the chairperson of the indigenous peoples' organisation KALGAD, who have been involved in a campaign against the mining corporation Sagittarius Mines Inc. (SMI), in response to their commencement of large-scale open-pit copper and gold mining projects in the boundary area of South Cotabato, Davao del Sur, Sultan Kudarat and Sarangani provinces; the ancestral lands of the Blaan people, who KALGAD represent. Her sister-in-law Ms Juvy Capion, as well as two of Juvy Capion's children were killed in the military attack on 18 October 2012. Erita has continued her peaceful human rights work since the murders, despite facing constant threats, which have included messages that the military forces are looking to liquidate her, and that she is being kept under surveillance.

The DOJ report details the accounts of multiple witnesses to the events of the massacre, which occurred at around 6 am on 18 October 2012. Various sources give testimony as to the culpability of the 27th Infantry Battalion for the murder of Juvy Capion and her children Jordan Capion and John Mark Capion by its members, and their actions on the day of the massacre. Witnesses state that troops entered the village of Fayahlob, South Cotabato province, under the command of 1st Lt. Dante Jimenez, and attacked the Capion family's house with a machine gun. Witnesses also detail that members of the Battalion, including 1st Lt. Jimenez and Sgt. Dennis W. Murillo washed the blood of the wounded away from the Capion household with water, and transferred the bodies of the victims from inside of their house to the ground outside.

Following the filing of a complaint for Murder on 6 March 2013 to the office of the Provincial Prosecutor of Daveo del Sur by Sukim K Malid, father of Juvy Capion, against Lt Col. Bravo, 1st Lt. Jiminez and the 14 army soldiers under their command, the same office ordered the accused soldiers to submit evidence as to the events of the morning of the killings.

In his counter-affidavit, the Battalion's leader Lt Col. Bravo denied all liability for the murders, on the grounds that he was not present on the day of the massacre, but in Battalion Headquarters at Tupi, South Cotabato. 1St Lt. Jimenez admitted his presence on the day of the murders. He alleged that the Battalion launched a foot patrol in the area surrounding the village of Fayahlob, in response to information of armed men in the area, and in compliance with an order given by Lt Col. Bravo in August 2012, with the directive “To defeat Southern Alip Regional Guerilla Unit Far South Mindanao Region and all other Armed Lawless Groups.” He claims to have stationed his troops on high ground over looking the village, and subsequently instructed his men to enter the village under the command of Sft. Murillo. In a joint counter-affidavit, the remaining 12 soldiers claim they were fired upon twice by unidentified men from a nearby hut as they entered the village, and that a firefight ensued.

Front Line Defenders urges the Philippine authorities to follow the resolutions of the Department of Justice.