On 8 September 2015, the Sindh High Court lifted the travel ban that had been imposed on human rights defender Mr Abdul Qadeer Baloch, also known as Mama Qadeer, in March 2015. 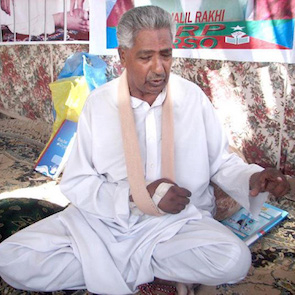 Abdul Qadeer Baloch is Vice-Chairman of Voice for Baloch Missing Person (VBMP), a non-governmental organisation which advocates for the release of individuals who were forcibly disappeared in Balochistan, and assists families of the disappeared to seek justice in the courts.

The organisation claims that over 21,000 persons have been victims of enforced disappearances in the region since 2005. The human rights defender, whose son was forcibly disappeared in 2009, led a peaceful march for a distance of over 2000km, from Quetta to Islamabad, to raise awareness of this. The march, which lasted four months, ended on 28 February 2014.

On 8 September 2015, the Sindh High Court lifted the travel ban that had been imposed on human rights defender Mr Abdul Qadeer Baloch, also known as Mama Qadeer, in March 2015.

On 8 September 2015, the Sindh High Court ordered the Ministry of the Interior to remove the name of the human rights defender from its Exit Control List and to lift any travel restrictions that had been imposed on him.

The Court rejected the arguments made by the Ministry of the Interior and the Federal Investigation Agency, who had added Abdul Qadeer Baloch's name to the Exit Control List due to his allegedly ‘anti-State’ activities. Having heard the arguments of Abdul Qadeer Baloch's lawyer Mr Wazir Khoso, the judges concluded that the human rights defender had campaigned for the rights of his community within the legal parameters and, therefore, should not be restricted in his freedom of movement.

On 4 March 2015 , Abdul Qadeer Baloch was informed of a travel ban that had been imposed on him. He was due to travel to a seminar organised by the World Sindhi Congress on human rights violations in Sindh and Balochistan. However, he was prevented from boarding his flight when he arrived at the Jinnah International Airport in Karachi.

Recently, the human rights defender's health has deteriorated. On 1 September 2015, his colleague Mr Nasrullah Baloch, who is Chairman of VBMP, brought Abdul Qadeer Baloch to the Civil Hospital Quetta for treatment. However, the doctors refused to treat him and, when Nasrullah Baloch insisted that they provide him with medical care, they called the police. Nasrullah Baloch was subsequently arrested and released later that same day. It is reported that the government had instructed the doctors not to treat the human rights defender.

The human rights defender and his colleagues were prevented from boarding their flight when they arrived at the Jinnah International Airport in Karachi. They were detained for approximately three hours and informed that their names had been placed on the Exit Control List (ECL), reportedly as a result of their allegedly anti-Pakistan activities. Abdul Qadeer Baloch was travelling in order to attend a seminar on 7 March 2015, organised by the World Sindhi Congress, on human rights violations in Sindh and Balochistan.