On 13 June 2013 Yolanda was shot while she was driving back home, after attending a protest against a proposed open-pit gold mine. 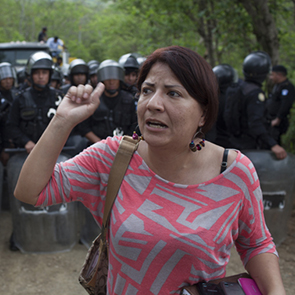 Yolanda Oquelí is the leader of the Frente Norte del Área Metropolitana – FRENAM (Northern Front of the Metropolitan Area), a movement of community members who defend the land from the expansion of mining activities in San José del Golfo and San Pedro Ayampuc, in the Department of Guatemala.

On 27 May 2014, the first hearing of the trial against human rights defender Ms Telma Yolanda Oquelí Veliz del Cid will take place in the single judge Eighth Court of Criminal, Drug Trafficking and Environmental Offences of Guatemala. The human rights defender faces charges of “false imprisonment”, “coercion” and “threats”, and denies the accusations.

The charges were filed by former workers of the mining company EXMIGUA, Messrs Oscar Danilo Alvarado Monterroso, Marco Tulio Aquino Garrido and Hery Arodi Gálvez Rivera, who allege that, on 3 May 2012 at 5:40pm in the Municipal Cemetery of San José Del Golfo, they were threatened to quit their jobs in the mine. The former employees identify Telma Yolanda Oquelí Veliz del Cid as the person behind the threats. On 30 April 2014, colleagues of the human rights defender, Messrs Alonzo de Jesús Torres Catalán, Valerio Carrillo Sandoval and Jorge Adalberto López – all farmers and human rights defenders – were convicted to nine years' imprisonment (commutable to a charge of Q10 (€0.90) per day) each for the same allegations that Telma Yolanda Oquelí Veliz del Cid faces. Furthermore, on 6 May 2014, the Eighth Court of Sentencing sentenced the three men to pay Q22,500 (€2,130) each for psychological and material injuries to the three former workers of EXMIGUA. The accusations are denied by Telma Yolanda Oquelí Veliz del Cid and her colleagues.

In March 2012, the community group, which the human rights defender leads, erected a peaceful camp called 'La Puya' at the entrance of the mining development El Tambor, to protest their concerns regarding possible water contamination and alleging that they were not consulted regarding the project. The mine is operated by EXMINGUA, a subsidiary of the American company Kappes, Cassidy & Associates. The judicial harassment mentioned above is not the first incident of intimidation suffered by Telma Yolanda Oquelí Veliz del Cid. On 13 June 2012, the human rights defender was the victim of an attempt on her life, when two men on motorbikes stopped her vehicle and fired, injuring Telma Yolanda Oquelí Veliz del Cid. Those responsible were never brought to justice, Front Line Defenders published an urgent appeal on the case. On 10 July 2013, shots were fired outside the human rights defender's home at approximately 2am. Front Line Defenders also published an urgent appealconcerning that case.

During the early morning of 10 July 2013, several shots were fired outside the home of Ms Telma Yolanda Oquelí Veliz del Cid, leader of the Frente Norte del Área Metropolitana (FRENAM – Northern Front of the Metropolitan Area), a movement of community members who defend the land from the expansion of mining activities in San José del Golfo and San Pedro Ayampuc, in the Department of Guatemala. The incident happened shortly after the killing of human rights defender Mr Santos Fidel Ajau Suret, as he returned from participating in the peaceful sit-in protests against a mining project at La Puya village.

On 10 July 2013, at approximately 2:00am, shots were heard being fired outside Yolanda Oquelí's home in San José del Golfo while she and her children were present inside. Upon hearing the gunshots the human rights defender's security personnel went to investigate and witnessed two unknown men fleeing on a motorcyle. Yolanda Oquelí was the target of an attempted killing on 13 June 2012 following her prominent role in the peaceful opposition movement to another local mining project at El Tambor village. Front Line Defenders issued an urgent appeal on 15 June 2012.

On 9 July 2013, at approximately 17:15, another defender of land rights, Santos Fidel Ajau Suret was shot dead while returning home after participating in a peaceful sit-in in protest against a local mining project. Two unknown men approached on a motorcycle on the road connecting San José del Golfo and San Antonio del Ángel and hit Santos Fidel Ajau Suret with three bullets in the back, after which they shot him twice more. The method of his killing held many similarities to the failed attempt on Yolanda Oquelí's life on 13 June 2012.

Santos Fidel Ajau Suret had previously received threats on 7 July 2013 from unknown individuals who had been linked to incidents of harassment and violence against local communities and who are believed to be connected to the mining company operating the“Progreso VII Derivada” project. The corporation behind the project, Kappes, Cassiday & Associates, is reported to have contracted at least one ex-military officer who committed acts of intimidation against the local population who were involved in the peaceful protests.

Although the ex-military officer in question is currently involved in a court case for these acts, the mining company has denied having any hand in the incidents, although it has admitted employing the man. The local population has reportedly been suffering from acts of intimidation, including the shooting of firearms in the vicinity of their protest actions, since the start of June 2013.

On 13 June 2012, human rights defender Ms Telma Yolanda Oquelí Veliz del Cidwas shot as she travelled home from a peaceful protest. At approximately 6:30pm, Yolanda Oquelí was driving away from a peaceful protest site in the village of La Puya towards San José El Golfo when she was confronted on the road by two men on a motorcycle. One of the men took out a gun and pointed it at Yolanda Oquelí, before she stopped her car, got out and threw herself to the ground. The men fired four shots, three hit the vehicle and one hit the human rights defender on the right-hand side of her body. The bullet lodged behind her liver. She managed to make telephone contact with someone who was able to find her and bring her to the hospital. She is currently in hospital receiving medical attention for her wound.

Local communities have been protesting at El Tambor mining site since March 2012 in order to raise their concerns over the negative environmental impact of the mining activities being conducted by Exploraciones Mineras de Guatemala, S.A. (EXMIGUA). Yolanda Oquelí has filed complaints with the Public Prosecutor’s Office relating to death threats she has received over the last number of months from workers at the mine, EXMIGUA officials and members of the Comisión Presidencial de Derechos Humanos – COPREDEH (Presidential Human Rights Commission).