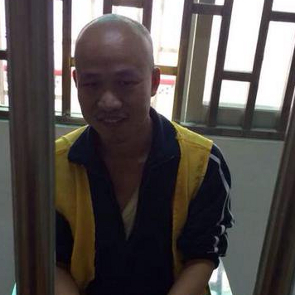 15 5 2015
Front Line Defenders calls for the release of Tang Jingling, Yuan Xinting and Wang Qingying on the one year anniversary of their detentions

16 May 2015 marks one year to the day since human rights defenders Tang Jingling, Yuan Xinting and Wang Qingying were detained by the authorities in Guangzhou city, Guangdong province.

All three remain in detention on charges of 'inciting subversion of state power'. It is believed the three will be put on trial in the near future. They are currently being held in Guangzhou No. 1 Detention Centre.

The three human rights defenders were detained on 16 May 2014, initially on charges of 'picking quarrels and stirring up trouble' but these charges were later changed to the more serious 'inciting subversion of state power'. The charges facing the three relate primarily to their involvement in a non-violent, civil disobedience movement, which Tang Jingling founded in 2006 following the suspension of his lawyer's license as punishment for his work. According to the suggestion submitted to the Guangzhou Municipal People's Procuratorate by the city's Public Security Bureau to indict the human rights defenders, their 'crimes' are the possession and distribution of copies of works on non-violent, civil disobedience, their renting of an apartment to exchange information and store materials, and their participation in a number of human rights activities.

Tang Jingling, Yuan Xinting and Wang Qingying printed off copies of the books as part of their efforts to engage in a non-violent, civil disobedience movement in China. The three were arrested following a raid on a flat they had rented. In that flat, police found, according to the suggestion to indict the three, “in total 231 copies of the books Breaking the Real Axis of Evil -- How to Oust the World’s Last Dictators by 2025 by Mark Palmer, Organizing: Guide for Grassroots Leaders by Si Kahn; From Dictatorship to Democracy by Gene Sharp; On Strategic Nonviolent Conflict: Thinking about the Fundamentals by Robert L. Helvey; Self-Liberation by Gene Sharp.”

Front Line Defenders calls on the Chinese government to respect and implement the decision of the UN Working Group on Arbitrary Detention and immediately release Tang Jingling, Yuan Xinting and Wang Qingying.

On 21 June 2014, Ms Wang Yanfang, the wife of detained human rights defender Mr Tang Jingling, was informed by officials in Jingxi police station, Baiyun District in Guangzhou, that her spouse had been formally arrested on charges of “inciting subversion of state power.” Tang Jingling has been in detention since 16 May 2014, and his Guangzhou colleagues, Messrs Yuan Xinting and Wang Qingying, have reportedly been arrested on the same charges.

The three human rights defenders were detained initially on charges of 'picking quarrels and stirring up trouble' but these charges were later changed to the more serious 'inciting subversion of state power'.

Front Line Defenders expresses its concern at the fresh charges being brought against human rights defenders Messrs Tang Jingling, Yuan Xinting and Wang Qingying, as well as their continued detention, which are solely related to their peaceful and legitimate human rights activities.