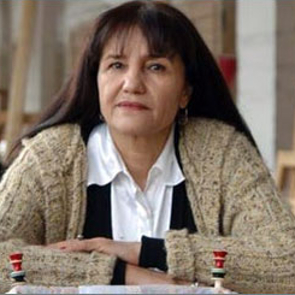 Umida Akhmedova is a film-maker and photographer who concentrates her work on gender issues in particular. Her son Timur Karpov is also a photographer and works for the Lenta.Ru press agency. In 2014 she was arbitrarily detained for attending peaceful protests in solidarity with the Euromaidan movement in Ukraine.

On 29 January 2014, at approximately 7:30pm, five police officers came to the house of Umida Akhmedova and Timur Karpov, produced summonses for both to appear for questioning at an internal affairs directorate in the Khamza district of Tashkent, and arrested them. Five other demonstrators, namely Messrs Aleksei Ulko, Ashot Danielyan, Ilgar Gasymov, Artem Ludny and Ms Gulsum Osmanova were also arrested. That evening, Timur Karpov sent a text message to his father stating that the group were being held in Khamza district police station, despite the fact that officials had told his sister that the group had been allowed to go home. The group's whereabouts remained officially unknown until 30 January 2014, and no information regarding charges against them or access to legal counsel was forthcoming.

On 30 January 2014, Timur Karpov was ordered to pay a fine of 2 MLN (around 740 EUR) under Article 201 of the Code of Administrative Convictions on holding meetings and demonstrations. Three of the other protesters, Aleksei Ulko, Ashot Danielyan and Artem Ludny, received 15 days of administrative detention for their participation in an unauthorised demonstration. There is no information about the charges against the other members of the group.

During the rally outside the Ukrainian embassy on 27 January 2014, the seven participants submitted a petition in support of the so-called Euromaydan protests. They further demanded the resignation of the Ukrainian Prime Minister Mr Mykola Azarov, expressed support for the Ukrainian people who they say are acting against an “inhumane, corrupt and totalitarian regime,” and condemned the unwillingness of the Ukrainian authorities to engage in constructive dialogue.

In Uzbekistan, holding unsanctioned assemblies and rallies is punishable by arrest, fines and even imprisonment; however, receiving official permission to hold demonstrations is nigh on impossible. The regulatory process is such that the principle of proportionality with regard to freedom of assembly is consistently breached with the result that this freedom is almost non-existent in the country.

Front Line Defenders is concerned at the charges against Umida Akhmedova and the rest of the group of protesters as they are solely related to the exercise of their legitimate right to freedom of assembly and the defence of human rights internationally.

On 16 December 2009 human rights defender Ms Umida Ahmedova, a photographer and film-maker, learnt that she is facing charges of slander and insult in relation to a book of her photographs. The charges relate to an investigation opened in November 2009 by the Uzbek Agency of Media and Information into several books and films created on gender issues, whose authors were examined by officials from the Ministry of Internal Affairs.

These books and films were produced with the support of the Gender Program run by the Swiss Embassy in Tashkent, which is a collection of humanitarian and educational projects and has led to the production of several works including documentary films, text books, collection of photographs and studies.

On 16 December 2009 Umida Ahmedova was called to Mirobod Department of Internal Affairs, where she learnt that she was officially suspected of charges of slander (article 139) and insult (articles 140) and article 190 “conducting activities without license” of the Uzbek Criminal Code. She was advised to hire a lawyer. The charges relate to the publication of an album of her photographs, “Women and Men: From Dawn to Dusk”, published in 2007; “Women and Men in Customs and Rituals” a documentary film also produced by Umida Akhmedova with the assistance of the Swiss Embassy Gender Program; and to “Virginity Code” produced by Umida Akhmedova but not finally approved by the Gender Program.

“Women and Men: From Dawn to Dusk” contains 110 photographs which reflect the life and traditions of the people of Uzbekistan. The Tashkent Prosecutor's Office has brought charges on the basis that the album of photographs and film constituted “an insult and slander of the Uzbek people”. The charges carry a possible sentence of imprisonment up to six months, or 2-3 years of “correctional work”.

Uzbek regulations require any publication produced by an NGO or international organisation to receive permission from state officials, including the Cabinet of Ministers. The investigation by the Agency of Media and Information follows the introduction in March 2009 of the “Program on enhancing national spirituality and struggle against phenomena and activities alien to the Uzbek way of living and mentality”. The program began with the screening of publications and media products by international organisations to determine whether they related to subjects identified as “hostile to the national culture and tradition”. It is believed that such subjects include gender equality, feminism, domestic violence, sex education, etc. A special commission of seven experts, which reportedly did not include representatives with gender expertise, were appointed to review the publications.