In March 2016 Ni Yulan was barred from leaving China to receive a human rights award in the United States. On 5 October 2013 she was released from prison after serving a two and a half year sentence for 'casuing a disturbance'. 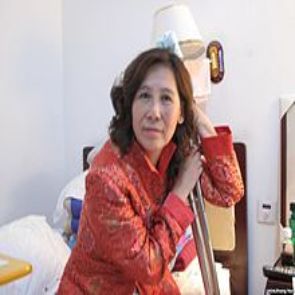 Ni Yulan is a lawyer who has been involved in human rights defence for 11 years. She has been persistently targetted by police since offering legal aid to a Falun Gong practitioner in 1999. In 2002 Ni Yulan attempted to document on camera her neighbours' forced eviction and the demolition of their home. She was noticed by the police, and subsequently dragged to a police station and beaten so severely that she was left permanently disabled. She is currently confined to a wheelchair.

At just after 9:00 am on 10 April 2012, human rights defender and disbarred lawyer Ms Ni Yulan was sentenced to two years and eight months in prison by Xicheng District People's Court in Beijing. She was convicted of 'creating a disturbance' and 'fraud'. Her husband, Mr Dong Jiqin, received a two-year sentence for 'creating a disturbance'. Ni Yulan is a veteran housing rights and legal activist who has provided free legal advice to hundreds of people in Beijing.

The charges against Ni Yulan and Dong Jiqin reportedly relate to their time spent living in a hotel in late 2010 and early 2011 after their own home was demolished. The couple were initially detained on 7 April 2011 and were tried on 29 December 2011. Prosecutors alleged that the couple prevented guests from registering at the hotel, destroyed a registration log book, insulted the staff and failed to pay hotel fees. Prosecutors further alleged that Ni Yulan was guilty of 'fraud' for misrepresenting herself as a lawyer in order to benefit financially. Ni Yulan's lawyer, Mr Cheng Hai, told reporters at the courthouse that the verdict was 'illegal and unfair'.

Ni Yulan and Dong Jiqin are being held in Xicheng District Detention Centre in Beijing. It is reported that Ni Yulan is in poor health, and according to her daughter, has been denied access to medical attention during her time in custody.

This is Ni Yulan's third prison sentence as a result of her work as a human rights defender. In 2002 Ni Yulan attempted to document on camera her neighbours' forced eviction and the demolition of their home. She was observed by the police, and subsequently dragged to a police station and beaten so severely that she was left permanently disabled. She was later jailed for a year. During Ni Yulan's second period of detention in 2008, prison authorities forbid her to use her crutches and as a result she was forced to crawl around the prison.

Following Ni Yulan's release from prison in 2010, she and her husband were forced to live in a park in Beijing for a number of months after having their home demolished and all their possessions confiscated. When their case gained domestic and international publicity, the couple were moved to a small room in a nearby hotel where they were kept under 24-hour surveillance. In December 2010, police began efforts to evict Ni Yulan and Dong Jiqin from their hotel room. It is thought that this was in response to Ni Yulan's continued assistance to people visiting her for legal advice following human rights violations. On 20 December 2010, police officers forced management at the hotel to cut the electricity supply to the couple's room. At the time of their detention, Ni Yulan and Dong Jiqin had been without electricity in their hotel room for 107 consecutive days. Front Line Defenders issued urgent appeals on 7 January 2011 and 8 April 2011 in this regard (http://www.frontlinedefenders.org/node/14189 / http://www.frontlinedefenders.org/node/14864)

Front Line Defenders believes that the detention and sentencing of Ni Yulan and her husband Dong Jiqin are directly related to their work in the defence of human rights, in particular the provision of legal advice to those whose rights were violated. Front Line Defenders is seriously concerned for the physical and psychological integrity of Ni Yulan and Dong Jiqin, particularly in light of the fact that Ni Yulan has been denied access to medical attention during her time in custody.

Human rights defender Ms Ni Yulan faces her 19th day without electricity or internet connection due to ongoing police harassment. Her water supply has also been cut for the majority of this time.

As of 7 January 2011, human rights defender Ni Yulan has had the electricity and internet connection cut for 19 consecutive days in the Beijing hotel room where she is currently staying, as a result of police pressure on the owners of the hotel. She has had only intermittent access to water during this time. This is the latest development in what appears to be an ongoing campaign of harassment against Ni Yulan.

On 20 December 2010, police officers from the Xicheng District in Beijing forced the management of the Yu Xin Gong Hotel to cut power to Ni Yulan's hotel room. It is thought that this is an attempt to force Ni Yulan and her husband out of the hotel in response to Ni Yulan's work with petitioners, who frequently visit her seeking the free legal advice she provides on their cases.

Ni Yulan has been jailed twice, most recently in 2008, for protesting against the forced demolition of her own home. During this period of imprisonment, the prison authorities forbade her to use her crutches and she was consequently forced to crawl around the prison. Upon her release in 2010, Ni Yulan and her husband, having had their own home demolished and all their possessions confiscated, lived in a park in Beijing for a number of months. Following international publicity gained by her case, she was moved to a small hotel room, where she and her husband are kept under surveillance by police and are subject to harassment.

Front Line believes that these developments form part of an ongoing campaign of intimidation and harassment against Ni Yulan and her husband, and are directly related to her legitimate and peaceful work in defence of human rights. Given her physical condition, serious concern is expressed for Ni Yulan's physical and psychological integrity.