Insight
Статус:
Threatened
About the situation

On 8 December 2012, a peaceful demonstration of around 100 LGBTI human rights defenders to commemorate International Human Rights Day was attacked by members of a radical right-wing group in Kiev.

The authorities had tried to ban the demonstration aimed at denouncing a proposed new law that could potentially ban any dissemination of information about LGBTI people.

Insight is a LGBTI rights organisation. 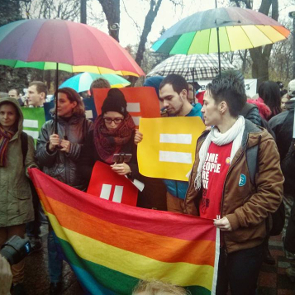 On 8 December 2012, a peaceful demonstration of around 100 LGBTI human rights defenders to commemorate International Human Rights Day was attacked by members of a radical right-wing group in Kiev.

The authorities had tried to ban the demonstration aimed at denouncing a proposed new law that could potentially ban any dissemination of information about LGBTI people. Despite these efforts the human rights defenders managed to submit an application to demonstrate in another location the same day.

Once the demonstration started, the police surrounded the protesters and claimed that the gathering was illegal. Subsequently Ms Elena Shevchenko from the LGBTI organisation Insight, one of the organisers, was given written notification that the demonstration was illegal despite the fact that the authorities had been notified of the demonstration's location and time, in accordance with Ukrainian law.

Despite the presence of the police, some of the demonstrators were attacked by members of the radical right-wing group Svoboda. One of the attackers managed to spray an unidentified gas into the crowd. The police detained the attackers as well as six LGBTI rights defenders who tried to protect themselves from the attackers. The organisers are currently preparing a written complaint to the police regarding the attack.

The main focus of the demonstration was the proposed bill which recently passed its first reading. On 2 October 2012 the Ukrainian Parliament voted in favour of bill 8711 which would ban “propaganda of homosexuality”. The bill implies introducing amendments to the Laws On Public Morality, On Press, On Television and Radio, and On Publishing that would make “propaganda of homosexuality” an administrative offence punishable by a fine.

The bill also aims to amend Article 300 of the Criminal Code of Ukraine, adding homosexuality to the list of prohibited topics along with propaganda of violence and propaganda of cruelty. Violating this article carries a prison sentence of up to 5 years. Now that the bill was passed in the first reading, it is most likely to be voted into law in the months to come.

If adopted, this law could threaten any public discussions of LGBTI-related issues since “propaganda of homosexuality” would become an administrative or even a criminal offence. Two similar bills were put forward in the Ukrainian parliament this year, but they have not yet been considered.

Front Line Defenders believes that should the bill be passed into law, it may be used to prohibit the dissemination of all kind of information concerning LGBTI people and their rights, and curtail the activities of LGBTI organisations throughout Ukraine. The absence of a clear definition of what constitutes “propaganda of homosexuality” creates a risk of multiple abuses by the authorities. As a result, LGBTI human rights defenders in Ukraine may find themselves at greater risk.