Ongoing campaigns of intimidation, harassment and persecution against HRDs in Colombia 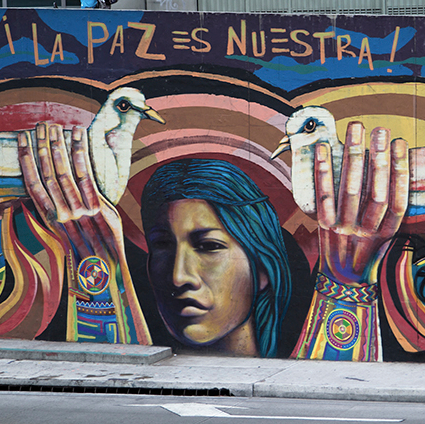 MOVICE is a coalition of human rights organisations founded in 2005, which monitors human rights violations committed by the state in the context of the armed conflict and calls for state agents and paramilitaries to be brought to justice. It works for the rights of victims to have truth, justice, and full reparation. Because of their work, MOVICE members have faced threats, physical attacks, arbitrary detentions, kidnappings and assassination attempts, and several people were killed.

Front Line is deeply concerned regarding reports that ongoing campaigns of intimidation, harassment and persecution perpetrated against human rights defenders by State and non-state actors, are not being adequately investigated by the Colombian authorities. Despite the campaign from the side of paramilitary groups intensifying in recent months, the authorities have failed to bring to account those responsible for orchestrating such acts. Most recently, Front Line has been informed of a planned assassination, as well as death threats which were issued against human rights defenders in the Valle del Cauca region of Colombia.

On 24 August 2011, it was revealed that two prison guards at the Tramacúa Prison in Valledupar, Cesar Department, had supplied a prisoner with a dagger in order to stab Mr Iván Cepeda Castro, member of Movimiento de Víctimas de Crímenes de Estado – MOVICE (Movement of Victims of State Crimes) and member of congress, while carrying out a prison visit on 22 May 2011. The prisoner however refused to carry out the attack. The prisoner then detailed the aforementioned planned assassination in a letter which he presented to Iván Cepeda Castro when he carried out another prison visit on 13 June 2011. The letter was also sent to the Director of the prison, as well as the Minister of the Interior and the Prosecutor General. The letter is believed to have contained the names of the prison guards involved in the incident. There are CCTV cameras installed in the prison, however the contents of the recording from that time have since been deleted. The prisoner was subsequently transferred to another prison.

According to the information received, in recent months there have been numerous calls to have the Tramacúa Prison shut down following reports that inmates are subjected to abuse and humiliation by staff of the Instituto Nacional Penitenciario y Carcelario - INPEC (National Penitentiary and Prison Institution). Iván Cepeda Castro has been instrumental in advocating for the closure of the Tramacúa Prison because of such reports, as well as allegations that the conditions in the prison are particularly poor.

It is believed that these threats form part of an ongoing campaign against human rights defenders orchestrated by paramilitary groups, and specifically the Águilas Negras, in the Valle del Cauca region. The national police, Seccional de Policía Judicial e Investigación - SIJIN (Criminal Investigation Unit), Departamento Administrativo de Seguridad – DAS (Administrative Department for Security), as well as the Prosecutor General, and other security bodies are aware of this campaign, however to date, no one has been held to account for violations committed against human rights defenders.

On 22 August 2011 former Colombian President Álvaro Uribe Vélez accused Ms Claudia Julieta Duque, Colombian journalist, and Mr Juan Forero, Andean region correspondent for the Washington Post, of being sympathizers of terrorism and accomplices of leftist guerrillas. The baseless accusation followed the publication on 21 August 2011 of an article in the Washington Post that alleged that President Uribe may have been involved in illegal actions using the DAS with the help of the United States.

In this connection, since 2010, Front Line has issued numerous urgent appeals regarding violations perpetrated against human rights defenders, however to date, those responsible for such crimes have not been brought to justice. The following is a summary of such appeals:

- 29 August 2011: Mr Principe Gabriel González Arango, a student activist and Regional Coordinator of the CSPP, was arrested on 18 August 2011 in the city of Pamplona and is currently being held in the city's prison to serve seven years imprisonment on trumped-up charges of rebellion and association with the Fuerzas Armadas Revolucionarias de Colombia – FARC (Revolutionary Armed Forces of Colombia).

- 18 July 2011: In recent months, a number of human rights defenders working in the department of Arauca, as well as members of the U'wa indigenous peoples organisation Asociación de Cabildos y Autoridades Tradicionales de Arauca – ASCATIDAR (Association of the Council of Traditional Authorities of Arauca) have become the subject of a criminal investigation launched by Interpol for their alleged membership of the Colombian armed opposition group, Ejército de Liberación Nacional – ELN (National Liberation Army).

- 6 July 2011: Human rights defender and journalist Mr Gonzalo Guillén has been falsely accused by Colombian President Juan Manuel Santos of having links with the FARC. Gonzalo Guillén is an independent journalist, former correspondent with El Nuevo Herald of Miami, and is currently an adviser for El Universo newspaper of Guayaquil (Ecuador) and President of the Instituto Prensa y Sociedad – Colombia (Colombia section of the Press and Society Institute). He has been long-involved in investigating and documenting crimes allegedly carried out by members of the Colombian armed forces, and has had to leave Colombia on a number of occasions for extended periods as a result of threats he has received.

- 30 May 2011: Mr Nelson Orrego, journalist with Periferia Prensa Alternativa (Periferia Alternative Press) since 2009, who has investigated and published various articles relating to victims of crimes carried out by paramilitary and drug-trafficking groups, received a death threat via email to his workplace.

- 24 May 2011: Ms Candelaria Barrios Acosta, member of MOVICE – Sucre branch and sister of Carmelo de Jesus Barrios Acosta, who was murdered by paramilitaries on 15 November 2006, along with Ms Ingrid Vergara Chavéz, spokesperson for the Sucre branch of MOVICE, Mr Pedro Geney, a member of MOVICE, and Mr Franklin Torres, a member of both MOVICE and the board of directors of the Asociación de Trabajadores Agropecuarios y Campesinos del Departamento de Sucre - ASOTRACDES (Association of Peasants and Agricultural Workers of the department of Sucre) received death threats.

- 20 May 2011: On 13 May 2011 the home of human rights defender Mr Danilo Rueda in Bogotá was broken into and computer memory sticks containing confidential and sensitive information regarding human rights abuses and his work in the protection of human rights were stolen. Danilo Rueda is the National Coordinator of the NGO Comisión Intereclesial de Justicia y Paz – CIJP (Inter-Church Commission of Justice and Peace), a church-based human rights organisation working to expose human rights violations committed in the conflict regions of Colombia by state security forces and paramilitary groups. Members of the group including Danilo Rueda have been subjected to death threats and other acts of intimidation in the past as a result of their work in the defence of human rights.

- 20 April 2011: Home of human rights lawyer and land rights activist, Ms Zoraida Hernández Pedraza, was subjected to an attempted break-in by two unidentified men while her and her family were present. Zoraida Hernández Pedraza is the President of Corporación Sembrar, an organisation that is dedicated to working for the defence and re-institution of lands in Colombia, and the spokesperson for various land rights organisations. She is also the spokesperson of MOVICE.

- 17 November 2010: Ms Carolina Rubio Esguerra, head of the Santander branch of the CSPP and member of MOVICE, was detained by members of the SIJIN in Bucaramanga City.

- 17 September 2010: Detention of human rights defender Mr David Rabelo Crespo, Secretary of the Board of Directors of the Corporación Regional para la Defensa de los Derechos Humanos – CREDHOS (Regional Corporation for the Defence of Human Rights) and member of MOVICE.

- 10 August 2010: Ms Judith Maldonado Mojica, Director of the Corporación Colectivo de Abogados Luis Carlos Perez – CCALCP (Luis Carlos Perez Lawyers Collective) was threatened during a violent attack in which her bag and materials related to her work were stolen.

- 30 July 2010: Ms Marta Díaz, president and a founding member of La Asociación de Familiares Unidos por un Solo Dolor - AFUSODO (Association of Relatives United by a Single Sorrow), and member of MOVICE, was subjected to death threats and intimidation through a threatening letter and email received on 24 July 2010.

26 May 2010: Killing of human rights defender Mr Rogelio Martínez, member of the Sucre branch of MOVICE on 18 May 2010 in San Onofre, Sucre.

30 March 2010: Mr Clodomiro Castilla Ospina, editor and publisher of the local magazine El Pulso del Tiempo and reporter with the Bloque Informativo at the Voz de Montería radio station, was shot dead in Montería in Northern Colombia, on 19 March 2010.

Front Line urges the authorities in Colombia to:

1. Conduct independent, impartial, and thorough investigations into all crimes perpetrated against human rights defenders in Colombia, with a view to publishing the findings and bringing both direct perpetrators and intellectual authors to justice, in line with international legal standards;

2. Ensure that all public officials abstain from making baseless accusations of alleged links with illegal organisations against human rights defenders in Colombia;

3. Take all necessary measures to guarantee the physical and psychological integrity and security of all human rights defenders working in Colombia;

4. Guarantee in all circumstances that all human rights defenders in Colombia are able to carry out their legitimate human rights activities without fear of reprisals and free of all restrictions including judicial harassment.